Home Entertainment Viral TikTok shows how a tourist was booed for climbing the sacred... 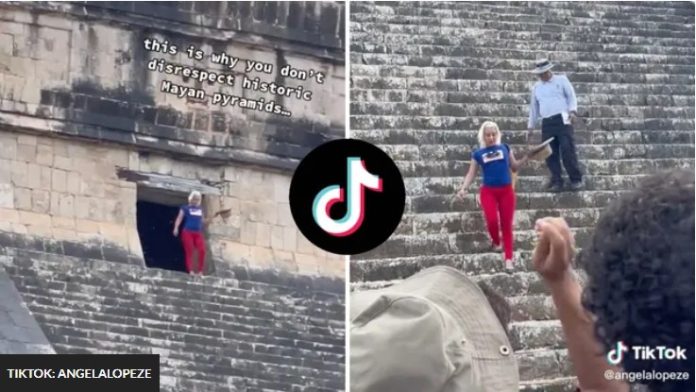 TikTok criticized a “disrespectful” tourist after he was filmed climbing an ancient Mayan pyramid in Mexico without permission.

In a viral clip that has gained more than 3.4 million views, a tourist was booed when she illegally climbed the steps of the sacred Castillo de Cuculcan in southeastern Mexico.

The crowd gathered on the esplanade of Chichen Itza and shouted “prison, prison, prison”, “lock her up” and “victim, victim” because “this woman does not follow the rules.”

The National Institute of Anthropology and History (INAH) has banned climbing the sacred Mayan building since 2008. He also announced fines ranging from $2,558 to $5,115, depending on the damage caused to the structure.

The tourist even danced a little on top of the platform, which angered Mexican and foreign visitors even more, as they whistled, chanted and booed even louder.

When she finally reached the bottom and tried to make her way through the crowd, she was sprayed with water and garbage.

“This is so disrespectful… don’t mess with my Mexican people,” read the caption to the video posted by angelalopeze.

TikTok criticized the tourist for climbing the sacred pyramid

In the comments, TikTok users criticized the unnamed tourist for her actions.

“Why can’t people BEHAVE when they go outside. So ashamed of her and horrified for these people when they see that something so sacred is being disrespected,” one of them wrote.

“I immediately feel happy that everyone there didn’t have it, and they rightly booed her,” another user shared.

“I am waiting for the Internet to find the identity of this woman, because there is something wrong with people. They should be publicly shamed,” said a third.

“The crowd shouting ‘prison, prison, prison!’ makes me feel better because society considers these actions egregious, not laudable,” someone else added.

At the time of writing, INAH authorities had not yet reported the incident, and the woman’s identity remains unidentified.

Halo Infinite Will Arrive With a Spanish Dub From Launch Day