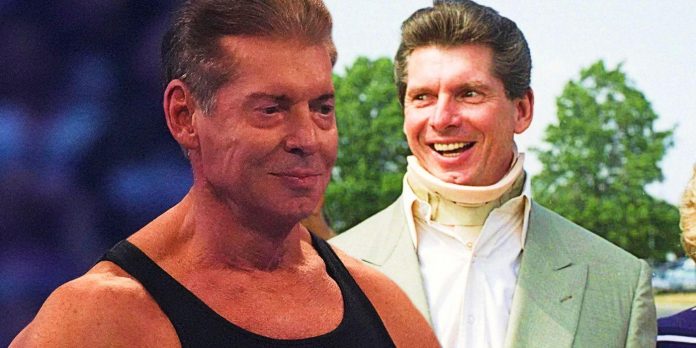 Content Warning: This article contains a reference to suicide.

Vince McMahon, the infamous WWE boss on and off screen, has amassed his share of racy scandals over his decades in charge. McMahon bought what would become WWE from his father in the early 1980s, and then almost immediately began a quest to break up the old territorial wrestling system and create a truly worldwide company. McMahon achieved this goal just a few years later thanks to huge successful events like WrestleMania and nurturing stars like Hulk Hogan and “Macho” Randy Savage.

McMahon is often called a genius when it comes to professional wrestling, although he would probably insist on being called a “sports entertainment” genius instead. Unlike most bosses, McMahon was also an on-air talent, spending years as a commentator before inventing the evil character Mr. McMahon, who had an epic battle with “stone cold” Steve Austin in the attitude era. Unfortunately, it’s never been clear how much Mr. McMahon is based on Vince’s real identity, and the various scandals he’s endured don’t help matters.

Most recently, it was reported that McMahon is under investigation by the WWE corporate board on charges of having an affair with an employee, increasing her salary during the affair, and then paying her $3 million for silence after she left the company. It remains to be seen to what extent these allegations will be confirmed, but even if they are all true, McMahon’s voting rights on the board of directors will make it difficult to oust him. In McMahon’s favor, all the equally upsetting scandals in which he participated in the past and managed to survive also work.

The US government is against. Vince McMahon’s Steroid Trial

Vince McMahon is the master of his own kingdom in WWE, but in November 1993, the US government charged McMahon with not only actively encouraging, but also personally distributing anabolic steroids among WWE wrestlers. Such medications are, of course, illegal unless they are prescribed by a doctor for legitimate medical purposes. Unfortunately for the prosecution, several important aspects of their case against McMahon were in doubt, as a result of which, in July 1994, the jury acquitted him of all charges. A television documentary drama about the trial is currently in the works.

In one of the biggest controversies in wrestling history, Vince McMahon decided to strip reigning WWE champion Bret Hart of his title at Survivor Series 1997, demanding that the referee ring the bell when challenger Shawn Michaels locked Hart in his own sniper hold. The reason McMahon did this was because Hart was going to leave for a WCW competitor, but refused to lose to the real enemy Michaels, and McMahon feared that Hart would transfer the WWE title to WCW TV. This finally led to a full on-screen admission that McMahon really owned WWE.

The tragic death of Owen Hart

Owen Hart, Bret’s younger brother, a popular mid-level member of the WWE roster in the 1990s, was exceptionally experienced in the ring, and many considered him a future world champion. Unfortunately, this dream ended in Over the Edge 1999, when the “King of the Deer” crashed to his death as a result of an unsuccessful trick with going on stage. McMahon is infamous for choosing to continue with pay-per-view after Hart’s death, and although WWE was not criminally responsible, Owen’s widow Martha Hart won a wrongful death lawsuit against the company. AEW recently awarded Owen Hart the Owen Hart Cup tournament.

Continuing Vince McMahon’s rather sad story with the Hart wrestling family, stable Hart Foundation member Brian Pillman died suddenly due to a heart problem in September 1997, on the day he was supposed to fight at Ground Zero pay-per-view. A move that was heavily criticized at the time and remains so to this day, unexpectedly frequent WrestleMania contestant McMahon conducted an irritating live interview with Brian’s widow Melanie the following night on Raw in which he seemed to be trying to justify WWE. and fighting any responsibility for Brian’s death. Melanie Pillman herself recently passed away at the age of 56.

Perhaps this is the most infamous and tragic crime ever associated with wrestling. Chris Benoit killed his wife Nancy and son Daniel in July 2007 before taking his own life. Although WWE was not responsible for his actions, Vince McMahon’s decision to rush to release a 3-hour tribute to Chris Benoit on Raw while the facts of the case were still being revealed proved disastrous, as it became clear shortly after the show that Benoit should have been found guilty. The following evening at ECW, McMahon was forced to counter the backlash by making an emotional but brief statement.

The Last Kingdom Season 5: Why its biggest change is so...

Mjolnir’s Return to the MCU May Answer the Riddle of Thor’s...