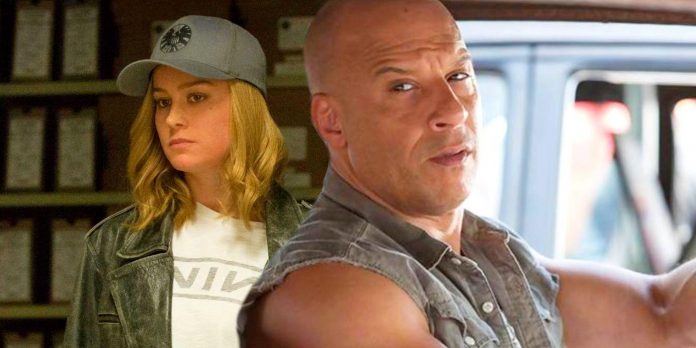 Vin Diesel goofs off with Brie Larson in a new behind-the-scenes image from Fast X. After the relative financial success of F9: The Fast Saga, Dominic Toretto (Diesel) and the rest of the crew will appear next in the film. the upcoming Fast X. Announced as the penultimate film in the main Fast & Furious franchise, which began back in 2001, the plot of Fast X is currently unknown, but it has already been confirmed that franchise newcomer Jason Momoa will play the villain.

After the sudden departure of longtime Fast & Furious franchise director Justin Lin , Louis Letterier now occupies the Fast X director ‘s chair . In addition to returning actors such as Tyrese Gibson, Ludacris, Jordana Brewster, Nathalie Emmanuel, Michelle Rodriguez and Sung Kang, Fast X is also going to introduce several new actors, including Larson, Alan Ritchson, Daniela Melchior and Michael Rooker. The plot of the film is currently unknown, but it has already been confirmed that Fast X will be the most expensive Fast & Furious movie to date with a budget of $300 million, mainly due to the actors’ salaries.

Related: Fast and Furious 10 Director’s Contradiction: All the Key Updates

In a heartfelt new Instagram post, Diesel shared a behind-the-scenes photo of himself and Larson, who both appear to be wearing their costumes for the movie. Diesel’s caption to the photo includes a big “thank you” to the cast and crew of Fast X, as well as fans of the franchise for continuing to believe in the film. Check out Diesel’s post below:

Much remains unknown about the upcoming part of “Fast and Furious,” and Larson’s role, in particular, is a major question mark for fans. It’s unclear how big a role Larson will play in the film, but given her star power due to her ongoing role as Captain Marvel in the MCU, it’s fair to assume this role will be much more than just a cameo. Diesel’s post is also not the first time he’s shown off a behind-the-scenes photo with Larson, as Diesel previously teased that the “Captain Marvel” star would be a major player in Fast X.

Although fans are currently in the dark about Larson’s role in Fast X, it is clear that Lin’s departure from the film did not affect the morale of the actors. Previously, Diesel published videos in which he fooled around with Momoa, shared news about filming with Ludacris and communicated with Melchior. With Diesel constantly updating on the status of Fast X, it’s likely that fans can expect to see more from the actor in the coming weeks, perhaps even revealing Larson’s character at some point in the near future.