Home Entertainment Vikings: What’s wrong with Baby Baldur (and why Ivar killed him) 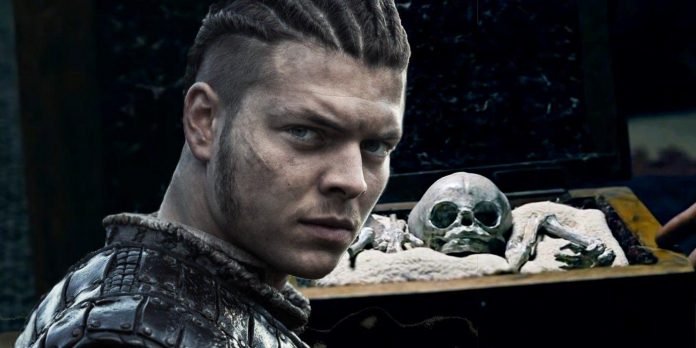 The character of Ivar the Boneless (kind of) had a son in Vikings season 5, but the baby Baldur was left in the forest to die due to a facial deformity. It’s the fate that Ivar narrowly avoided as a baby when Ragnar Lothbrok saw that Ivar had a deformity in his legs and took him to the woods to be left to his fate. The season 5 death of Baldur brings Ivar’s story full in this way. So, what was wrong with baby Baldur, and why did Ivar kill him?

Ivar was the youngest son of Ragnar and Queen Aslaug, and he was born with a genetic disorder known as osteogenesis imperfect, also known as brittle bone disease. He had narrow odds of even surviving the harsh life of 9th century Norway with this condition, so Ragnar felt that killing Ivar was the best choice. He found himself unable to cut baby Ivar’s throat, so he simply abandoned the boy in the woods. Once Aslaug discovered their son was missing, she brought him home, so that Ivar survived against all the odds – going on to eventually become a king, and even a Norse god (albeit self-proclaimed).

Related: Vikings: What Illness Ragnar Lothbrok Had After The Siege of Paris

In addition to his non-working legs, Ivar was also impotent. However, his wife Freydis secretly conceived a child with another man and then convinced Ivar that he had successfully impregnated her when she drank some of his blood. Believing himself to be a god, Ivar decided to name the baby after Odin’s beautiful son Baldur. But while Freydis saw the beauty in Baldur after he was born, Ivar saw only a son who was deformed. Despite Baldur’s face being never shown, and it’s not explicitly said what deformity he had, what was wrong with baby Baldur was probably a cleft lip. This congenital disability results in the lip and sometimes the roof of the mouth improperly forming, resulting in a split that — in severe cases — can be so large that it opens up into the nostril.

While babies born in modern times with a cleft lip or palate are able to be treated with support and eventually have corrective surgery, in the time in which Vikings is set, Baldur’s facial deformity would have been close to Ivar’s brittle bone disease in spelling certain death. While some babies who are born with a cleft lip or palate can breastfeed with assistance, Ivar and the midwife’s reaction to seeing the baby suggests the issue was quite severe with Baldur. The close comparisons between Vikings characters Ivar and Baldur might suggest that Baldur could have survived had his father been willing to give the boy a chance. While it’s unknown what was wrong with baby Baldur, Ivar may have at least been able to provide him with a chance for his wife’s sake.

Ivar’s decision for leaving Baldur to die is somewhat complicated. As he says goodbye to his son, he tells him that he’s doing it so that Baldur won’t experience the same suffering that Ivar himself went through growing up. However, it’s clear that Ivar is also interested in protecting his own pride and image. He has presented himself to his people as a living god, and he fears that having a son with a facial deformity will remind people of his own disease. When he reports Baldur’s death to his people, he tells them that the baby was beautiful and perfect in every way. Sadly, it’s soon revealed that foxes dragged baby Baldur into their den and destroyed any evidence to the contrary. So, in that respect, it didn’t matter what was wrong with baby Baldur.

The death of Baldur is ultimately the result of Ivar’s failure to heed his father’s advice. During their two-man “raid” of Wessex, Ragnar told Ivar that his deformity had made him the strongest out of all his brothers and that it was a blessing rather than a curse. But when Baldur is born, Ivar allows his insecurities to get the better of him. Had he let Baldur live, the ensuing battle against his brothers would have ended with their crippling defeat. But in killing Freydis’ baby and turning her against him, Ivar paved the way for his own downfall.

Did Ivar Kill Baldur Because He Knew The Baby Wasn’t His?

In Vikings, it may not have been what was wrong with baby Baldur that led to his tragic death. Instead, it’s entirely within the realm of possibility that Ivar knew the baby wasn’t his — which would’ve wounded his already insecure pride. There is a moment in the series in which Ivar could’ve questioned Freydis’ loyalty but then accepted that his perceived Norse god blood made her pregnant instead of sacrificing his own pride. If Ivar knew that another man impregnated Freydis, it might have induced a sort of breakdown, as his ego had grown so large at this point that he genuinely believed he was a god. That sort of news would not only crush his spirit, but also his very self. Such an affront to his self-image wouldn’t have been taken lightly in Viking culture.

On the other hand, Ivar’s impotence was questioned because he could get Katia pregnant, but only after believing she was Freydis incarnated. While his impotence in earlier seasons certainly affected his relationship with Freydis, it didn’t seem to be a problem in the end. On top of that, if Ivar definitively knew that Baldur wasn’t his, it could explain Baldur’s death but not the fact that he let Freydis and the other man live. If Ivar really knew about Freydis’ affair on Vikings, it would’ve certainly ended in several characters’ deaths due to the blow to his ego.

Will Hugh Jackman appear in Deadpool 3?