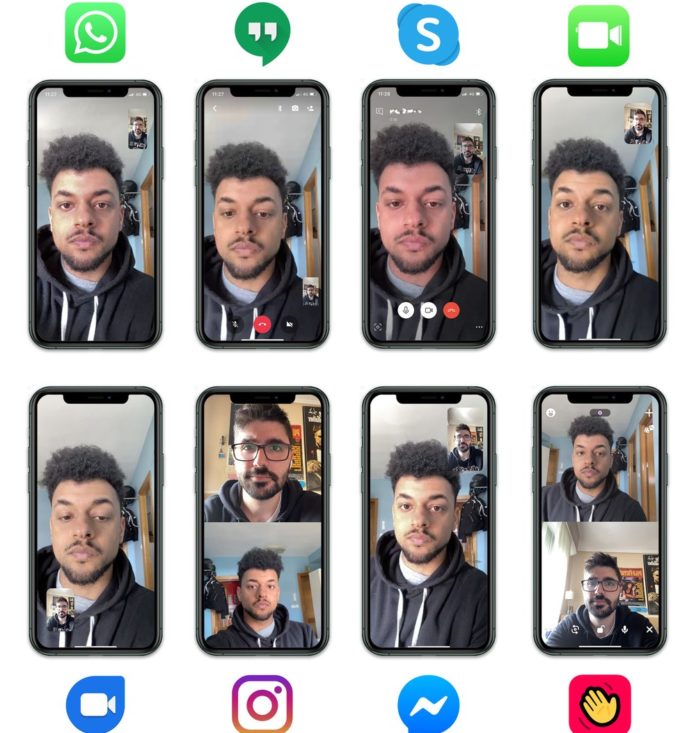 Videoconferencing applications became popular due to the new coronavirus pandemic. Apps are an alternative for work meetings, study, or just to keep in touch with family and friends. Thinking about it, the Xataka portal conducted a study with Skype, Hangouts, WhatsApp, FaceTime, Google Duo, Instagram, Facebook Messenger and Houseparty in order to test the efficiency of each one based on the consumption of mobile data.

The tests were carried out with two iPhones 11 Pro so that the cameras of both cell phones participating in the calls had the same specifications. It was found that the better the quality of the image offered, the greater the expense.

Monitoring was carried out using 10-minute video calls between two people in each of the applications. Based on the consumption of data during that period and assuming that it is constant and linear, the consumption for an hour of connection and how many minutes of call can be made for each GB were calculated.

By far, Hangouts was the most-spent app. In the 10 minutes of video call, 517 MB was used, the equivalent of more than 3 GB per hour, a number capable of emptying a reasonable data package. After it, another Google application appears: in second place is the Google Duo, consuming just over half, with 271 MB.

The third largest consumer of megabytes of mobile internet was Instagram, with 195 MB, followed by Houseparty, with 103 MB. The latter, according to the test, offers an image quality very close to Hangouts with significantly lower spend.

The other applications did not reach 100 MB spent in 10 minutes. FaceTime, Apple’s application, was the champion of lowest consumption. There were 31.6 MB, equivalent to 316 minutes of calls per GB. However, the app was also the one that offered the worst image quality.

It is important to note that the study is not scientific, just a reference. Many factors can interfere with consumption, such as the number of people participating in calls, signal stability and video resolution.

Hangouts, for example, was tested again by the portal due to the big difference in relation to the others. In the second test, consumption dropped to 488 MB. In the third, made with a call made by a Google Pixel 2 XL to the iPhone 11 Pro, 135 MB was spent in 10 minutes.

It is worth remembering that Brazilian operators allow the use of some of these applications without discounting the plan. Without worrying about the consumption of the internet package, it is possible for the user to choose those that offer higher quality calls. It is necessary to consult the plan contracted with the telephone company to find out if any shortages are included in the package.

Lenovo Confirms That Legion Phone 3 Pro Will Use Snapdragon 898