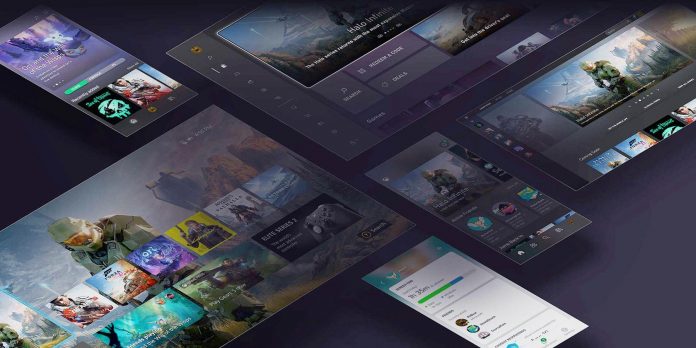 A video has appeared on Twitter showing the new Xbox control panel in action. This is because some players are getting early updates for the upcoming Xbox UI, which is featured in a video showing what players can expect after its official launch.

The new Xbox user interface is currently being rolled out to select players as part of alpha testing, and these players have shared what the future model looks like. Xbox is making major changes to the design of the user interface in order to optimize the interaction with Xbox and provide players with additional personalization options. Early community feedback ensures that Xbox fine-tunes the user interface before it becomes publicly available in 2023.

A new Xbox user interface has appeared online, but thanks to Twitter user Gabor-117, the video of the user interface now shows much more. The video gives players an idea of what to expect and what direction Xbox has gone in creating this new design. At the top of the interface is a “Go back” section with tiles showing recently played games and apps. Scroll down to see the section with the most popular games in Game Pass, followed by the recently added ones in Game Pass. The following sections highlight specific game genres and broad categories such as “nostalgia” to showcase specific games that players may want to play in Game Pass. In addition, there is even a section of EA Play games available in Game Pass, a section of Cloud Gaming, a section of cross-platform games and a section of optimized Series X games, etc. It seems that Xbox’s intention is to integrate Game Pass into the user interface, instead of it being an option before, as something else that players could immerse themselves in from the user interface.

This update makes Game Pass more accessible to players than it was before. Sections in the Game Pass are now visible in the user interface, so players can see what is available in the subscription service without logging into the app, which can make it easier for players to learn about games being removed from the Game Pass. Lowering barriers to Game Pass through user interface design could mean more players will subscribe to the streaming model.

While some players praise the new user interface for presenting games they wouldn’t otherwise know about, others find it off-putting as it looks like one big advertisement. However, unlike Netflix, Game Pass is convenient for consumers with exchange options available. Whether players will be overwhelmed by these options or enjoy the excitement of so many games that are conveniently at their fingertips depends on whether these players subscribe to the Game Pass, although Xbox is betting on the latter.