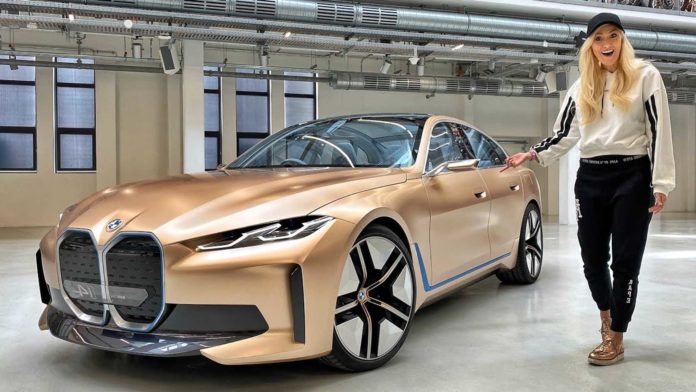 BMW introduced the concept version of the fully electric i4, which it will release in 2021 earlier this month. The YouTube channel Supercar Blondie takes us to BMW’s headquarters in Munich and allows us to take a detailed look at Concept i4, which we’ve only seen from official press photos.

After the cancellation of the Geneva Motor Show due to the coronavirus epidemic, the BMW Concept I4, which was announced with a written press release like other vehicles, gained great popularity with its futuristic design.

We’ve only seen the vehicle in shared press images so far. We will understand that we have not yet fully discovered this handsome man who seems to have skyrocketed from science fiction movies. Until now. The new video of the Supercar Blondie channel, which has 3.2 million subscribers on YouTube, takes us to BMW’s headquarters in Munich, where it introduces the Concept i4 personally.

The video contains really interesting information about the vehicle. For example; Did you know that world-famous composer Hans Zimmer personally improved the sound of the Concept i4’s internal combustion engine to establish a better relationship between driver and vehicle?

Another interesting feature of the car is the huge curved infotainment display that comes together on the digital instrument panel. The screen is sensitive to the right, allowing you to change driving modes. Thus, you automatically adjust the color of the LED lighting in the environment.

Of course, the most important thing in a car is its engine that powers it. Like the upcoming iX3 and iNext, the Concept i4 has BMW’s current fifth-generation eDrive powertrain. The vehicle, which has a 530 horsepower (395kW) electric motor under its hood, completes the 0-100 km / h acceleration in about four seconds and can go up to 200 km / h.

BMW has said that some of the Concept i4’s design elements will be moved to the production model. According to the information provided by Supercar Blondie, one of these will be wheels. The BMW i4, which is announced to offer a driving range of 600 kilometers, will be produced at the company’s main plant in Munich.