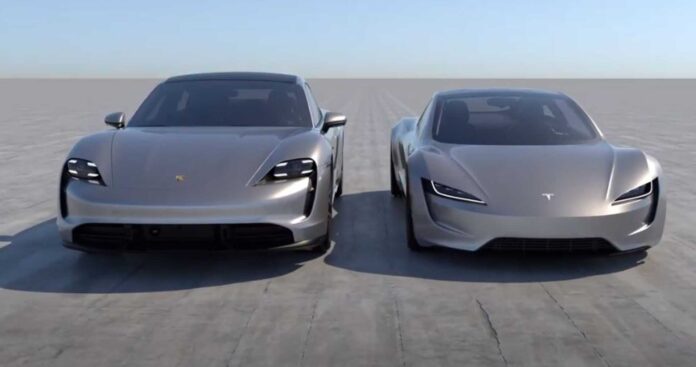 Exciting waiting for Roadster, the fully electric sports car that Tesla will be on sale shortly. A video posted on YouTube allows us to compare this performance monster with a 100 percent electric Porsche Taycan model in size and exterior design, which will accelerate 0-100 kilometers in just 1.9 seconds.

The new Roadster, the successor of the 2008-based Roadster, the first vehicle of the US-based electric car maker Tesla, lifted the veil on it in November 2017. Before going on the road, the vehicle, which was sent to space with the strongest rocket of SpaceX and the world, Falcon Heavy, will be available in 2020 after a three-year wait.

Tesla Roadster, which is announced to be faster than any serial production car that is legal to be used on the street by going from 0 to 100 km / h in only 1.9 seconds, will rewrite the rules in the sports car segment with its extraordinary equipment features. The driving range of the fully electric vehicle will be 1000 kilometers on a single charge.

Although Tesla Roadster appears in front of Porsche Taycan in almost every performance item including horsepower, torque and range, I think it would not be wrong to say that both vehicles have a very impressive design language in terms of design. For this reason, the decision about which tool is better is up to you, our valuable readers.

Cardano founder explained why 7 out of 8 founders left Ethereum