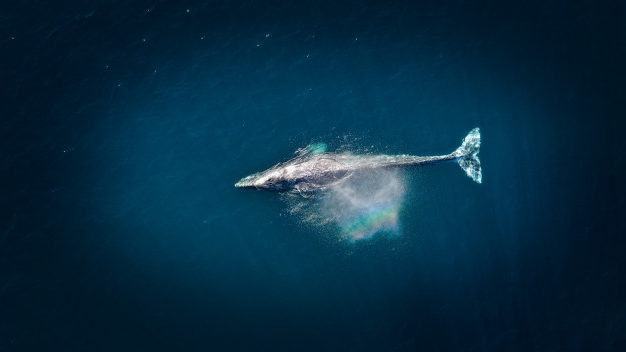 Images recorded with drones off the coast of New Zealand reveal the feeding time of a blue whale in the world’s largest mammal group. In the images we can see how the whale attacks the krill herd with minimal effort and maintains its energy.

Blue whales, which are considered to be the largest mammal in the world with their lengths of up to 30 meters, are not fed with large and satisfying foods, contrary to popular belief. So much so that there are shrimp-like krills only 1/2 cm in length at the top of the feeding chain of these creatures.

As you can imagine, a huge creature needs to catch these small and crustaceans in herd to feed them. In doing so, they have to be as smart as opening a huge-sized mouth for a single shell can burn more calories than calories from a meal. The new study, published in PeerJ magazine, explains exactly this topic, how blue whales conserve their energy while feeding on water.

Eating near the surface saves energy for blue whales:

Although having a huge body makes blue whales very strong against attacks from outside, there are some costs to carry this body. Being drawn deep into the water to look for feed; it requires high energy-consuming maneuvers for diving whales, such as diving, breathing and sudden turns. For this reason, it may be much wiser to feed near the surface of the water.

Speaking about this, academician Leigh Torres says that whales can save more energy by hunting in shallow and near the surface. Discovering that herds of krill are more intense towards the surface in field investigations along the shores of New Zealand, Torres and his team state that whales will dive for less time, hold their breath less and spend less energy by targeting these prey.

The feeding moments of a blue whale were recorded with drones:
Research findings say that blue whales near New Zealand have relatively shorter dive times compared to blue whale populations on the California coast. In addition, the images recorded with drones clearly show that whales made a decision as to whether it is worth surfacing for a krill herd.

Talking about the images recorded by the drones, Torres said, “The video allows us to define many great kinematics and body motion coordination that whales have not seen before. The images also allowed us to see the reaction of the hunt in a new way. We can see that as the whale approaches, the krill begins to escape, which is really surprising. ”

Researchers say that findings based on drone images are derived only from the behavior of a whale, and these findings cannot be adapted to wider blue whale populations. Still, the images contain very striking data on the feeding ritual of blue whales.

V is considered the most handsome man of 2020 worldwide

Scary Video Showing How Coronavirus Spreads With a Single Cough

A New Study Reveals Link Between Nightmares And A Personality Trait