Home Entertainment Victor Lures Vecna Out Of The Upside Down – Explanation of the... 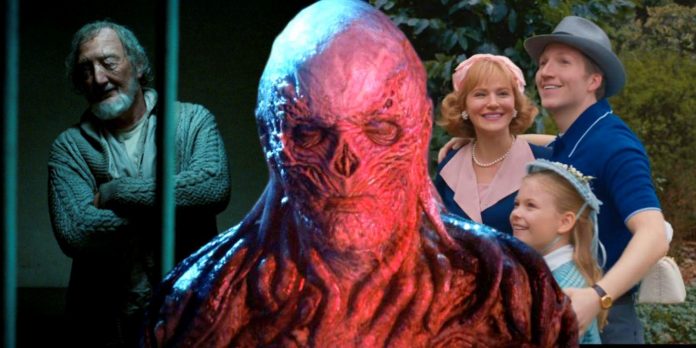 There’s evidence to support a theory that suggests Robert Englund’s Victor Creel will be the one to lure Vecna out of the Upside Down in Stranger Things season 4, volume 2. Following the likes of the Demogorgon and the Mind Flayer, Vecna serves as Stranger Things’ latest villain to prey on the town of Hawkins. However, unlike the others, Vecna does his evil bidding from the alternate dimension, acquiring victims through his psychokinetic powers.

Through the first few episodes of Stranger Things season 4, volume 1, Vecna’s actions and motivations are looming mysteries. Chrissy Cunningham serves as his first known victim, forcing Eddie Munson to go on the run as the last known person to see her alive. When Max nearly becomes Vecna’s third victim, the Hawkins group falls deeper into the mystery, which involves an investigation of the Creel House and Steve, Nancy, Robin, and Eddie spending time in the Upside Down after going through the “Water Gate.”

Related: Nancy Escapes Vecna Thanks To Robin In This Wild Stranger Things Theory

In “Chapter Seven: The Massacre at Hawkins Lab,” Nancy becomes a victim of Vecna’s curse, but she’s also able to discover the truth about Vecna’s identity. Not only is Vecna Dr. Brenner’s first test subject, “001,” but he’s also Henry Creel, the son of Victor. Finding and defeating Vecna will be a priority in Stranger Things season 4, volume 2, but in order to do, the Hawkin group will need all the help they can get. Using Vecna’s last living family member might be the only option.

Vecna’s identity as “Number One” and Henry Creel are some of the biggest surprises to come out of Stranger Things season 4 thus far. Flashbacks to the Creel family have been prominent in the season after Nancy learns of Victor’s name while investigating. She and Robin eventually travel to Pennhurst Asylum disguised as psychology students to meet with Victor. The man who attempted to scratch out his own eyes with razor blades is obviously still haunted by his past, but he gives Nancy and Robin a better picture of what happened before the gaps are filled by the Vecna identity reveal.

Victor moved his family to Hawkins in 1959, where strange encounters began to occur in their new home. What Victor didn’t know was that Henry was responsible, experimenting with his psychokinetic abilities. He would kill animals with his mind and put his family through “walking, living nightmares” as punishments for their past actions. Before being brought to a doctor, Henry killed his mother and sister but passed out before doing the same to his father, Victor. Henry was in a coma but survived, where he was eventually put in the care of Dr. Brenner as Victor was convicted of the murders, including his son’s, since he was told every member of the Creel family had died. Victor used the insanity plea, leading to his stay at Pennhurst, but he still believes some kind of demon caused the deaths. Instead, they were the work of his own evil son, who believes he’s superior to the human race.

Stranger Things Theory: Victor Helps Bring Vecna Out Of The Upside Down

To get the upper hand on Vecna, the Hawkins crew will likely need to get the villain to come out of his comfortable environment. By being able to kill through his psychokinetic powers, he has no reason to leave the Upside Down. He also has an advantage in the Upside Down with the hordes of Demobats and other threats residing in the alternate dimension that can protect. While the group seemingly travels back into the Upside Down armed and ready for battle according to the Stranger Things season 4, volume 2 trailer, it will likely take more to fully defeat the villain. Luring Vecna out of the Upside Down where he’s vulnerable could be the only hope for the group. Any convincing from Dustin, Steve, and the group would not work, but using Vecna’s own family might be a different story.

Related: Why Vecna Is So Obsessed With Time

Nancy and Robin already spent time with Victor, so he could be willing to assist them if they ask for his help as it involves his son, who he thought was dead. Perhaps, he will think his son could be saved, or maybe there’s a chance of redemption for Henry. Vecna clearly still harbors resentment for his father, even asking Nancy, “how was old, dumb, blind Victor?” He might not think highly of the man, but Vecna is clearly keeping tabs on the man if he’s aware of his blindness and the fact Victor’s still alive in Pennhurst Asylum. Since Vecna couldn’t kill his father when he was still Henry, Victor and the group could use that motivation to bring Vecna out of the Upside Down with the hope of finishing off the Creel family for good. Using Victor as bait could be the first step in carrying out an even bigger plan if Eleven can return to Hawkins in time to act as the real gamechanger.

Though Kevin L. Johnson’s Victor Creel has been shown a few times in flashbacks, Robert Englund’s version of the character has only appeared in one episode, “Chapter Four: Dear Billy.” Seeing as Englund is best known for playing the iconic role of Freddy Krueger, there was hope the actor would have a pivotal role in Stranger Things season 4. He isn’t the villain as many had theorized, but it would be interesting to see Englund play a part in taking down the season’s big antagonist, especially since the Nightmare on Elm Street franchise inspired the installment.

Breaking Victor out of Pennhurst wouldn’t be too much of a task for the Hawkins group considering all the other schemes they’ve accomplished. Convincing a man who has already lost all hope also wouldn’t be much of a challenge, as he’s likely willing to do anything to get out of Pennhurst, even if it leads to his death. He might not be prepared to see what kind of monster his son has turned into, but a more prominent role for Englund’s Victor would be more satisfying for those originally intrigued by his casting. A cameo is better than nothing, but making Robert Englund’s character the one who turns the tides on the fight against Vecna would not only make Victor’s arc better, but it would enhance Stranger Things season 4 as a whole.

Cardi B and Offset Welcome Their Second Baby