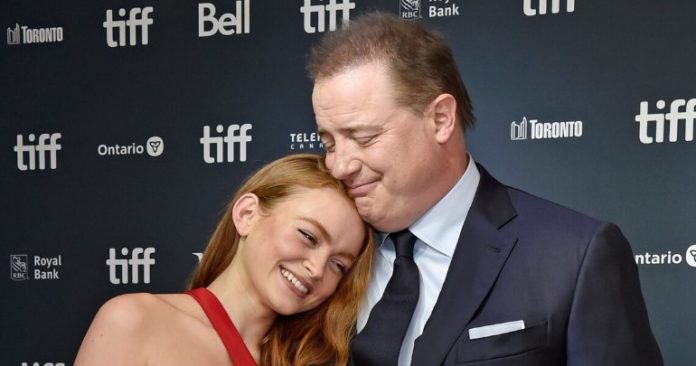 No one knows about one of the gems of “Stranger Things” Sadie Sink, who has recently become an incredible actress. After mind-blowing roles in a sci-fi series and a thriller, the star received many golden opportunities. Of which one was a Whale. Performing with some Oscar-worthy actors, Sink has taken her place among the leading names in the industry.

Thanks to her magnificent aura and versatile acting skills, her legendary co-star couldn’t stop talking about the star in an interview. Brendan Fraser, who played the role of a 600-pound man in the upcoming psychological drama, has a lot to praise the 20-year-old star.

What did Brendan Fraser say about Sadie Sink and her role in The Whale?

When Max Mayfield achieved fame, we could all see what a dramatic and potential actress Sadie Sink was becoming. In an interview with GQ, Fraser broke down all his iconic characters, one of which, of course, was Keith. While there’s no denying that his performance was great, other stars like Sink were also on top. In fact, speaking about Cinque, Fraser confessed to him how she “controlled her breathing perfectly.”

Sadie Sink plays the role of Ellie, Charlie’s daughter, played by Fraser himself. In addition, when the entire star cast gathered for a joint question-and-answer at TIFF 2022 Variety, director Darren Aronofsky also spoke highly of Cinque. In his own words, he was “shocked” by Sadie Sink’s remarkable performance. “To be around someone so young, owning their craft, trained and professional,” Aronofsky continued.

In addition, they all highly appreciated the star of the “Guardians” Hong Chau. The 43-year-old actress plays Liz, Charlie’s friend and nurse. “Hong Chau makes everyone feel better around her,” Fraser said in this segment.

All these stars and how they played their key characters are the reason why you should watch this movie as soon as it is released on December 9, 2022.

Taylor Swift to Be First Woman to Take Billboard ‘Woman of...