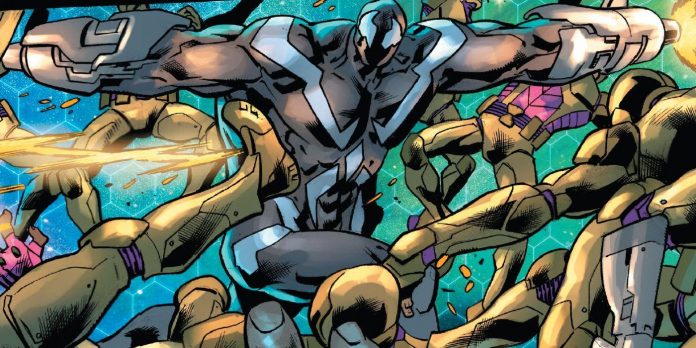 Eddie Brock, the former owner of the Venom symbiote and the current King in Black, has released a new form that gives him abilities very similar to those of Iron Man and the latest version of the Hulk. While Eddie is stuck in time travel, still unable to fully control his abilities of the King in Black, he lands in the 602 century in the body of a powerful fighting machine called War-Symbiote.

In the Marvel universe, the most famous battle suit, without a doubt, is the Iron Man armor used by Tony Stark. Iron Man is armed with a variety of sophisticated weapons, and Tony Stark also typically uses advanced artificial intelligence that controls the suit’s systems and answers Tony’s questions, providing him with useful analysis and insight. In recent storylines, Bruce Banner has also developed his own twisted version of a combat suit, with the difference that the “armor” is nothing more than the body of the Hulk himself, and Banner’s consciousness “controls” him like a spaceship with engines that run on pure rage. Venom’s War-Symbiote combines some of the best features of both Iron Man and Starship Hulk.

In “Venom #8” by Al Ewing, Brian Hitch, Alex Sinclair and Pete Pantazis, Eddie lands on the flagship of Kang the Conqueror in the midst of one of the many battles in which the time-traveling warlord participated. It seems to be in the past (Kang’s past, but Eddie’s future; time travel is difficult) Kang reached a sort of agreement with the King in Black, which gave him access to armed symbiotes as soldiers. The one Eddie uses is a Warstar—class type two combat klintar, and its features are simply impressive. In addition to the standard abilities of the symbiotes, Warstar can generate any weapon, including firearms, flamethrowers and a Jedi lightsaber, which Eddie uses to duel with Kang. The symbiote also acts as an AI. a system for Eddie, providing him with information about his surroundings and the exact odds of a battle.

This is a very interesting look at the powers and functions of the symbiote. Venom usually fights with forces inspired by Spider-Man’s abilities: he is strong, fast and deadly in close combat. However, the Warstar symbiote seems to be inspired by the abilities of other heroes. His ability to create any weapon gives him an arsenal that puts Iron Man to shame, and the symbiote directs Eddie like Tony Stark’s AI. usually does (even with the same level of banter). On the other hand, the fact that Eddie’s mind, not his body, is “loaded” into Warstar makes it very similar to the current status of the Hulk, where Bruce Banner’s mind “controls” the body of the Green Goliath.

In general, using symbiotes as live suits of battle armor looks like a great idea. The abilities demonstrated by Eddie Brock in his new Warstar form are much more exciting than Venom’s classic set of abilities, and the fact that the symbiote’s consciousness works like a pre-programmed AI. brings a new round to his relationship with the owner. Battle Klintars are a great addition to Venom’s story: perhaps Iron Man and Hulk inspired the King in Black Eddie Brock to create these formidable soldiers in the future.