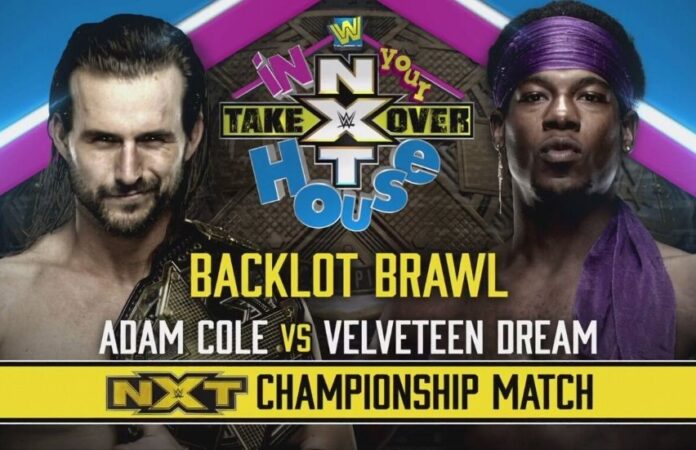 During the NXT broadcast via USA Network, it was confirmed that the TakeOver: In Your House main match between Adam Cole vs. The Velveteen Dream for the NXT Championship will take place in a Backlot Brawl.

On the show, a preview of what will be seen this Sunday on WWE Network was presented. The fight itself was filmed last Thursday in the parking lot of the Full Sail University, and everything would indicate that it will be in a film format. The Backlot Brawl stipulation is a tribute to a historic WrestleMania 12 fight, when WWE Hall of Famer Roddy Piper defeated Goldust.

We recall that if Adam Cole retains his Championship, Dream will no longer be able to compete for the Top NXT Title as long as the leader of The Undisputed Era holds the belt.

Before the main fight of the night it was announced that Tegan Nox, Shotzi Blackheart and Mia Yim will face Candice LeRae, Dakota Kai and Raquel Gonzalez in a 6 woman tag team match. Johnny Gargano and Candice Le Rae have been having conflicts with Mia Yim and Keith Lee for several weeks. On the other hand Tegan Nox and Shotzi Blackheart deal with the constant attacks of Dakota Kai and Raquel Gonzales.

At the start of the weekly NXT show, Le Rae and Yim had their heads-up encounter but both were disqualified for attacking each other under the ring. Nox tried to separate them both but Dakota and Raquel left to go after Nox.

All of the NXT Takeover: In Your House matches (except the main match) will air live this Sunday, June 7 from Full Sail University in Winter Park, Florida. It can be seen through the WWE Network and then we leave the updated card:

NXT TakeOver: In Your House Billboard

Backlot Brawl for the NXT Championship
Adam Cole (c) vs. The Velveteen Dream