Home Entertainment Vampire Survivors: Where to Unlock the Grim Grimoire 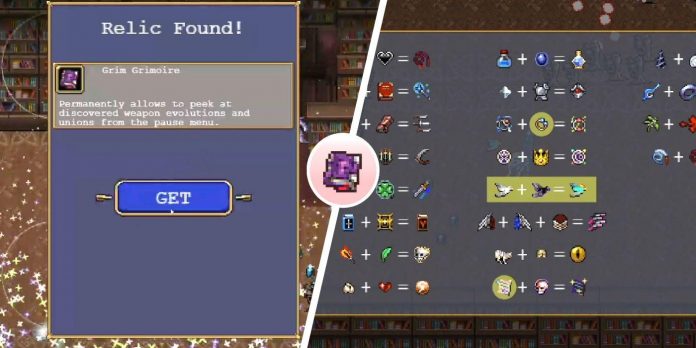 The Grim Grimoire is a relic in Vampire Survivors that permanently unlocks the grimoire in the pause menu. The grimoire is a screen where players can view all the evolutions and alliances they have discovered in their save file. In addition, the information includes which weapons, combinations, and passive items were used to obtain each entry. In other words, the Grimoire Relic in Vampire Survivors functions as an in-game wiki, giving players easy access to how far they’ve come in regards to items, and what they can do to replicate the same results.

To unlock the Grimoire in Vampire Survivors, players must find a Relic of the Grim Grimoire in the Inlaid Library, the second stage of the game. Players can access this stage once they reach level 20 in the Mad Forest. After entering the Inlaid Library, open the map and find a purple folio with a red bookmark. After noticing him, track his location by following the green arrow on the player’s screen. Alternatively, players can simply head to the far west of the starting area to eventually find the purple book lying on the ground.

To clarify: The relic of the Grim Grimoire should lie in front of a small bookshelf opposite another bookshelf on Stage in Vampire Survivors. Between them is a round table with two stools and a framed map right behind the wall. Around the purple folio there will be a translucent white bubble with sparkles rising from its lids. After selecting a Grim Grimoire in Vampire Survivors, its icon will no longer be displayed on the map.

If you find a Grim Grimoire in Vampire Survivors, a new button called “Open Grimoire” will appear in the lower right corner of the pause menu. By clicking on this button, you will see all the Evolutions and Alliances discovered by the player, highlighting in yellow those that are currently equipped by the player.

Keep in mind that the Grimoire only shows weapons in Vampire Survivors that were obtained earlier. However, it does not include any weapons that have yet to be discovered. Therefore, players cannot use the Grimoire as a means of viewing the items they need to find. On the other hand, it shows whether a combination of weapons or passive items leads to evolution. This information includes Evolutions that have yet to be studied. Nevertheless, the Grimoire is a great and convenient tool for old and new players, allowing you to easily view information about weapons, items and Evolutions.

Olivia Newton-John’s ex-husband Matt Lattanzi is “so overwhelmed” with support after...