Home Sport Valverde: “The Golden Ball? You give it to Messi and you solve... 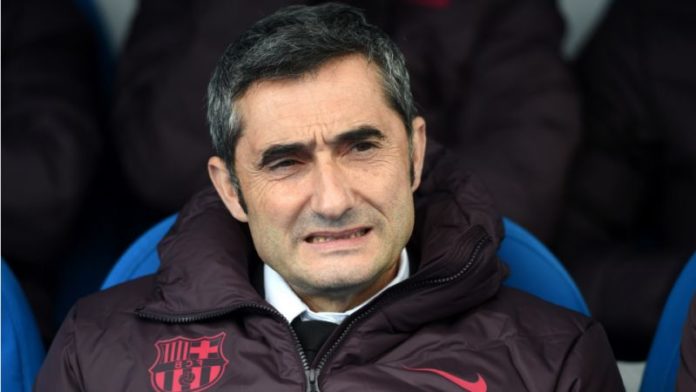 Ernesto Valverde appeared at a press conference before visiting Atlético de Madrid without the injured Ousmane Dembélé. The French must be two and a half months off after breaking the biceps femoris.

I trembled. “I have talked to him, now he is calmer, after the game he was affected by the recidivism in the injury despite being on the other leg, it is a setback that is being remitted, by the player that it will be a problem but we will replace it with the players of the subsidiary as we have been doing, I was in a good mood, I was without discomfort; when he arrived two years ago he was very young, had great potential and had to learn how things worked here, he has been fitting different issues, I was better, calm and training well, so it has been an important and unexpected setback. ”

Medical explanations for the injuries of Dembélé. “I am not a specialist in muscle fibers but I understand that everything comes from the first injury, he had an important operation.”

Absence of the squad in the Matchday. “I don’t know why it was nobody, it could not go away, it seems an interrogation, I was not what happens? I did not see it and I do not expect to be explained, for that I see the movie; the club decided to do it by resonance and there are things that come out and others that don’t. ”

Piqué and the party in NY. “When your father has told you, don’t go partying … you have never gone, right?”

Return from Griezmann to the Metropolitan. “Whatever you say will be the same, people will receive you as you see fit, at Atlético he gave everything and did great seasons, he left with a transfer in between and there will be people happier and less, we do not have to influence and the player neither, we are all used to playing in harsh environments and he is too, it will be emotional for him but also with many incentives. ”

Umtiti. “We are happy because it is performing at a high level and we want it to continue that way.”

Arturo vidal. “I do not understand that his words are a pressure, it will be a personal reflection, we are not in the winter market, there are important parties and when summer begins we will see.”

Rakitic “It is a clear possibility that I can play, it is a balanced player that can help us, it unites the team a lot in front and behind the route that it has, it has security, it has played less because there are more players but it is clear that it is always a possibility after make a good game the other day. ”

Replace Busquets. “We will find out tomorrow but there are several valid options.”

Golden Ball. “If you value the best you have to give it to Messi.”

Wanda “Any game in this stadium is an exam for everyone, it is one of the important games of the year and we know that we have to be well and strong to win there, away from home it is not a good season but we have also made good matches, the May tomorrow win, it will have an important mood boost and we want to be us. ”

Comebacks “We have managed to overcome after taking the initiative but when they have attacked us they have hurt us, Atlético performs well in a solid defensive system but knows how to attack well and has decisive players, it will be an attractive game.”

Another British Giant Is Also Interested In Lionel Messi