Home Sport Valverde, about Ansu Fati: “I don’t regret having bet on him” 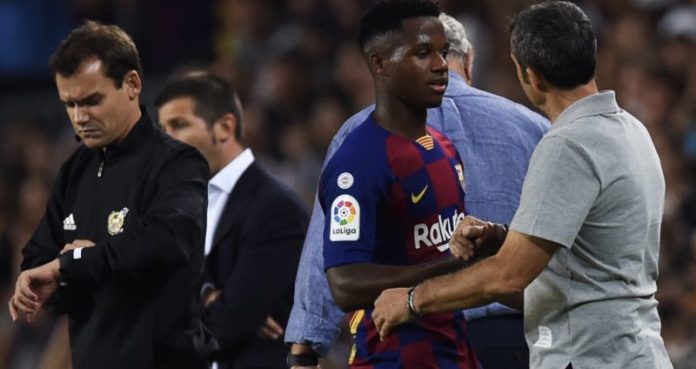 The coach of FC Barcelona, ​​Ernesto Valverde, was questioned at the press conference by Ansu Fati, the great surprise of this season in the Barcelona team and who with only 17 years, has managed to be international U21 with Spain.

However, in recent times, the young player born in Guinea has not counted too much for the Extremaduran coach. It is no coincidence that the explosion of the ‘MSG’ (Messi, Suarez and Griezmann), the new trident culé, sent up the options of ownership of a Fati whose name jumped to the fore day and day as well.

“Of course I do not regret having bet on Ansu Fati at the beginning. He is very young, he has a lot of space ahead. He is in our dynamics but he knows that he is riding between the first team and the second,” said Mr. Blaugrana.

Valverde wanted to praise his young promise in the absence of minutes in the last meetings, despite the fact that Ansu Fati was the starter in the last League match, against Valladolid, in which the end did not have his best performance.

“In the end I know that when a new player comes out and in the brilliant way he got out, he generates a lot of expectation, but things are as they are. Yesterday he turned 17. He has not yet made the category and this is a process of learning. You have to learn to manage the rhythm of the games, grow physically, etc. “, he concluded.