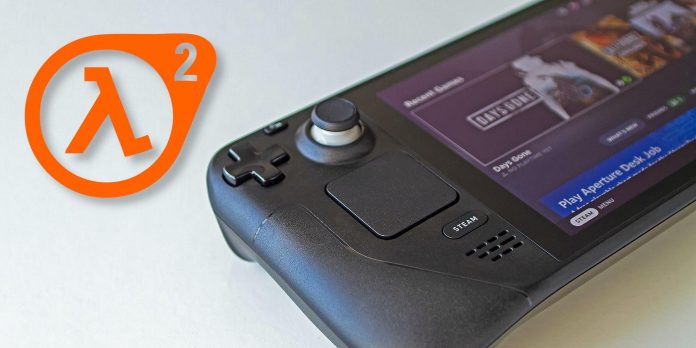 A video has appeared showing the loading of Half-Life 2 on an early prototype Steam Deck. While Valve’s past attempts at hardware have not yielded positive results, the company was finally able to abandon the software, releasing its portable device earlier this year. Deck is currently well received by gamers and is particularly notable for its versatility and the fact that it is basically a portable PC that people can use on the road.

Valve also recently released images of some Steam Deck prototypes showing the various stages the system went through before the company settled on the final product. Many will be interested to see the changes that have taken place, with some of the early builds dating back to mid-2019. Some might suggest that since these are prototypes, they probably didn’t launch any games properly, but a video from one of the developers shows that a previous iteration of Deck could have run one of the company’s own games.

As PC Gamer noticed, Pierre-Lou Griffet from Valve, who also demonstrated the prototypes, took to Twitter to show the previous version of Steam Deck during its download. As soon as it is loaded into the operating system, the hand that opens Half-Life 2 enters the frame. The rest of the video consists of loading the game into the main menu to the familiar Valve music that many fans are used to. Along with the video, Griffiths says that this particular prototype had about half the GPU power of the final version of the device.

Perhaps it’s understandable that Valve wanted to show this particular game on the Steam Deck. After all, both were developed by the company, and Half-Life 2 is considered one of the best FPS games ever created. Also recently leaked images have emerged showing early concept art of the gravity cannon, the most infamous weapon in the game.

Of course, speaking of Half-Life games, it’s hard to do without discussing the elusive third entry. Unfortunately, it seems that Valve is not interested in continuing the story of Gordon Freeman, which ended with a cliffhanger at the end of the DLC “Second Episode” in 2007. There are rumors about a Half-Life RTS called Citadel, it seems that the developer is struggling to leave this universe behind. Having said that, every year it becomes less likely that fans will ever see the third part of the main series.