Home Entertainment V wears his voice in Our Beloved Summer, this is what a... 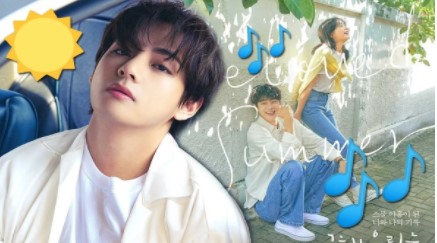 Our Beloved Summer is one of the December premieres in the world of Korean dramas and BTS’s V is part of it with a song, we will tell you how the first preview of the track sounds.

Today is a very good day for ARMY, the boys filled their fandom with surprises and the emotion has been present on social networks. One of the news that fans received from BTS was a new look at the song that Taehyung prepared as his new OST, here we tell you how it sounds and what you should know about it.

The melody will be part of Our Beloved Summer, a K-Drama also known as Aquel Año Nuestro and which stars actor Choi Woo Shik, who is also a great friend of V in the Wooga Squad.

Taehyung’s OST is called Our Summer (Christmas Tree) and it was introduced through a preview of the first episode, making everyone happy for the upcoming official release. How it sounds?

On the day of the premiere of this drama, the singer’s voice appeared in the background in one of the quieter scenes, the shot takes us into the study of the character Choi Woong while he is making lines and applying color to a drawing.

The atmosphere has a cozy vibe and as the sun sinks into night, Taehyung’s voice is played to the accompaniment of a guitar. You can watch the scene and listen to a snippet of the soundtrack below:

The song is not officially released yet so the full version is not yet known, but for now we can enjoy the performance with the glimpse featured in the Korean series.

The Wooga Squad Shows Its Support At Out Beloved Summer

For the fans it was really special that V sang for the Korean drama where his friend Choi Woo Shik acts, repeating the feat of Itaewon Class where the BTS idol was part of the OST within the story starring Park Seo Joon.

The displays of support continued and Park Hyung Sik, who is also one of the members of the group of friends known as the Wooga Squad, also shared a video of the part of the drama where V’s song was heard, letting us know that he is following closely. the activities of both actors.

SEGA Announces Sonic 3 The Movie And A Live-Action Series For...