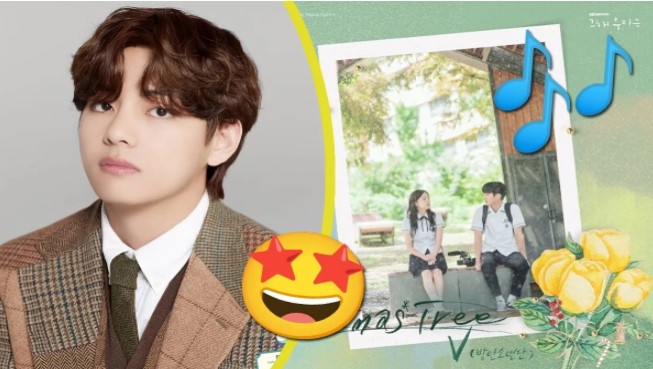 Christmas Tree accompanies the scenes of the drama Our Beloved Summer and today we can finally hear the complete melody performed by V.

Since before the drama premiered, the announcement that Taehyung would be part of the soundtrack moved many K-Pop fans and especially ARMY, knowing a new song by the BTS idol brought great joy to his fandom, but it was still more special because the story stars Choi Woo Shik, a great friend of the singer.

Our Beloved Summer has already shown some previews of what V’s song sounds like, but now it’s time to enjoy the melody in its entirety and be amazed by the great talent of this singer.

Taehyung’s OST for this drama is called Christmas Tree and here we tell you why its premiere was really successful, as well as the MV that accompanies the track.

CHRISTMAS TREE: V OST HAS ITS OWN MV

The clip reminds us of scenes from Choi Woong and Gook Yeon Soo, characters who star in the drama and who are also played by Choi Woo Shik and Kim Da Mi. We have seen them since they were students and they began to become close, but time moves on and also the connection between them changes.

Now we see Choi Woong working in his studio, developing exhibitions and more, but unlike the early years the leads were together now there is a dose of nostalgia present.

Meanwhile, Taehyung’s soft voice accompanies every moment with a soft rendition of the ballad that has won over ARMY and K-Drama Our Beloved Summer fans.

Christmas Tree debuted at # 1 on iTunes US, repeating the achievement previously achieved by Sweet Night, his OST for Itaewon Class. This is not only a great joy for ARMY, as it makes Taehyung the first Korean soloist to debut two songs at the top of the chart.

The new OST accompanying the Our Beloved Summer story is also the first song to hit the fastest 50 # 1 around the world, proving that ARMY from all over the planet were looking forward to hearing it.

Don’t leave Rex Nation, answer a fun test to find out what gift Jungkook would give you this Christmas.