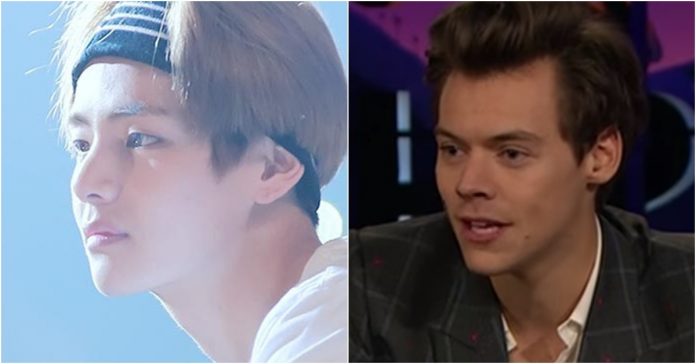 The K-pop idol and the British musician have something more in common than a passion for music, fashion is a huge influence on both of them.

BTS’s Kim Taehyung and Harry Styles are two of the best dressed celebrities in the world art scene, apparently the boys have similar tastes in style and clothing. The singers dazzled the fans with this yellow suit.

V is one of the BTS members who showed his love for creativity and great artistic sense in the teasers of the record material ‘BE’, the dancer’s skills allowed him to be a fashion visionary and style icon .

Harry Styles is not far behind as one of the great influences of the fashion industry , he took advantage of a new musical era to renew his artistic concept and retro aesthetic, strongly inspired by the great stars of the 70s and 80s.

The BTS members took ARMY back in time with the single ‘Dynamite’, as well as being their first song entirely in English, they put vibrant looks and popular clothing back on the audience’s radar in the past.

HARRY STYLES AND V HAVE THE SAME LIKE FOR BRIGHT COLORS

On Sunday 10 January, Idols of BTS took the stage at the Golden Disk Awards 2021 , interpreted ‘ON’, ‘Life Goes On’ and ‘Dynamite’, songs that marked the charts worldwide.

During the performance of ‘Dynamite’, Taehyung dazzled the camera with an incredible yellow three-piece suit , accompanied by a navy blue shirt and pink tie, flashes of color that gave him a more fun outfit .

On the Weverse platform, Bangtan Sonyeondan’s vocalist updated his profile with a selfie behind the scenes of the annual awards show, the mirror witnessing the excellent combination and bearing.

Harry Styles modeled a suit of the same range of shades during the afterparty of the 2020 BRIT Awards. Harry Lambert, the British personal fashion stylist, said that the star had always wanted to have a yellow outfit , the garments corresponded to a collection for women, they later made the modifications and it was perfect for the star.

In different social networks and online communities, the fans of both singers published their first impressions of the duo’s looks , talked about how good they looked and how much inspiration they are for their fandoms.

Selena Gomez is rumored to be unhappy without Justin Bieber