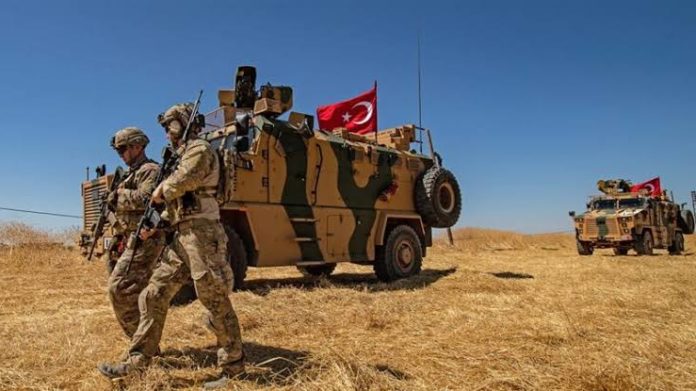 USA, began to withdraw from Turkey’s border in Syria.Kurdish-led forces said American troops began withdrawing their positions at the Syrian border on Monday before an expected Turkish invasion.

US-backed Kurdish-led forces said American troops began to withdraw from their positions on the northeastern border of Syria before a Turkish invasion, in which the Syrian Kurds said they would defeat five-year achievements in the fight against the Islamic State group.

Syrian Kurdish fighters have also accused Washington of failing to comply with its commitments to its key allies in the fight against IS. A major change in US policy.

The US White House did not receive immediate approval without deleting positions in northern Syria.

President Recep Tayyip Erdogan, however, said American troops have begun to withdraw from positions, and in a video released by a Kurdish news agency, he showed a convoy of American armored vehicles heading away from the Tal Abyad border area.

Erdogan said that the White House would pull aside the forces in Syria in the northeast of the United States and pave the way for an unexpected Turkish attack – in particular, leaving Kurdish fighters fighting alongside long-standing US forces to defeat the Islamic State group.

Erdogan did not explain in detail the planned Turkish attacks, but said he was determined to stop what they perceive as threats of Turkey’s Kurdish fighters in Syria.

Erdogan has threatened to launch the military operation across the border for months. Ankara sees the Syrian Kurdish forces fought for a Kurdish rebellion in Turkey as a threat to the country.

In the US, Republicans and Democrats warned that allowing the Turkish attack could lead to the massacre of the Kurds and could send a disturbing message to American allies around the world.

As you know, the Syrian Kurdish Democratic Forces for the leadership, said the US draws from the first start of the Syria-Turkey border.

SDF said in a statement, “They comply with the commitment of American forces and withdrew their forces to the border with Turkey,” he said. “Turkey is now preparing to invade Syria’s northern and eastern regions.”

Askeri The military operation in the north and east of Syria will have a huge negative impact on our war, ek he added.

In an agreement between Ankara and Washington, joint patrols patrolled a security zone covering 125 kilometers (78 miles) along the border between the cities of Tal Abyad and Ras al-Ayn. Syrian Democratic Forces, have removed the fortifications of the region which is considered a threat by Turkey and had received heavy weapons back. Meanwhile, the US and Turkey, began joint air and ground patrols of the area.

However, Turkey and the United States, parts of the depth disagreed; Ankara also wants its troops to follow an area 30 to 40 kilometers (19 to 25 miles) deep. Despite the agreement, Erdogan continued to threaten an attack.

The Kurdish-led fighters became the main US-backed force in the fight against the Islamic State in Syria, and in March the group seized the last land strip held by extremists, in Abu Bakr al-Baghdadi, leader of the Islamic State.

Syrian Kurdish Kurdish power, “our Union will not hesitate to defend our people,” he added, adding that he lost 11,000 fighters in the IS war in Syria.

It was stated that the Turkish attack would lead to the revival of IS. IS dormant cells are currently planning to release 12,000 militants, detained by Syrian Kurdish fighters in northeastern Syria, in the “domestic and international security threat”.

Kurdish fighters also control the al-Hol camp, which has more than 70,000 people, including at least 9,000 foreigners, mostly wives and children of IS fighters.

Turkey’s Foreign Minister Mevlut Cavusoglu, since the beginning of the crisis in Syria, “We support the territorial integrity of this country and we will continue to support” tweeted.

Ankara, “region away from terrorists, Turkey is committed to ensuring the survival and security,” he added. We will contribute to peace, peace and stability in Syria.

The Syrian Kurdish Hawar news agency and the UK Human Rights Syrian Observatory say US troops evacuated their positions near the cities of Ras al Ayn and Tal Abyad on Mondays.