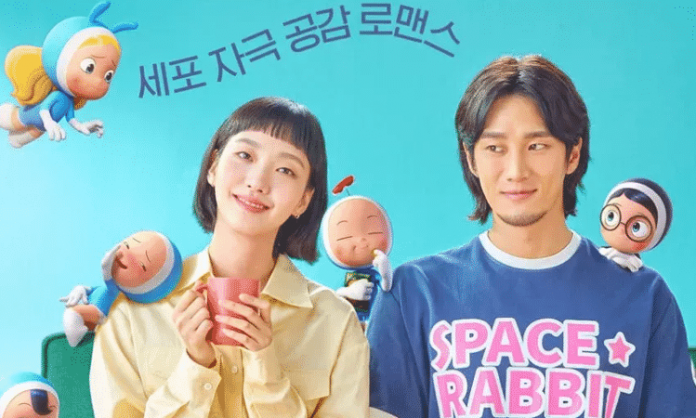 ‘Yumi’s Cells‘, the drama will premiere next September. The new drama that will bring us the performances of Kim Go Eun and Ahn Bo Hyun is titled ‘Yumii’s Cells‘, has finally revealed its official broadcast program. At the same time, the drama based on a popular webtoon also presented us with a poster featuring the two main characters.

‘Yumii’s Cells‘ is a romantic drama that should show the unique relationship between the characters of Kim Go Eun and Ahn Bo Hyun.

‘Yumii’s Cells‘ is a drama based on Lee Dong Gun’s popular webtoon of the same name. Yumii is an office worker who will make her point about things through brain cells that control her thoughts, feelings, and actions.

The new poster for ‘Yumiis’ Cells’ drama features Goo Woong, played by Ahn Bo Hyun and Yumii, sitting side by side while surrounded by some of the romantic, rational, emotional, and flirtatious cells. The cells work hard to make both of them happy and weave a romantic story that arouses viewers’ curiosity.

In addition to Kim Go Eun and Ahn Bo Hyun, the drama will also feature performances by Lee Yoo Bi as Ruby, who has a strange but lovable and energetic nature. Then there’s Park Ji Hyun as Sae Yi, Goo Woong’s best friend and who could be Yumii’s love rival.

And Jinyoung from GOT7, who will play Yoo Bobby, a handsome, sweet, and intelligent man.

Last April, SM Entertainment also confirmed that SHINee’s Minho will make a special appearance in the drama, where he will play Chae Woo Gi, a young man from Yumii’s office and will be a key character in the drama.

‘Yumii’s Cells’ will not only feature the performance of these amazing actors but will also feature animations with various emotions and expressions, which will be part of the cast.

This new drama will begin airing on September 17th and will be directed by Lee Sang Yeob, who worked on ‘Familiar Wife’ and ‘Shopping King Louie’.

The screenplay will be written by Kim Yoo Joo, who was also the screenwriter for the drama ‘Find Me In Your Memory’, who will collaborate with screenwriter Kim Kyung Ran and Song Jae Jung, who worked on ‘W: Two Worlds’ and ‘Memories of the Alhambra. ‘.

PlayStation Plus May Games Revealed