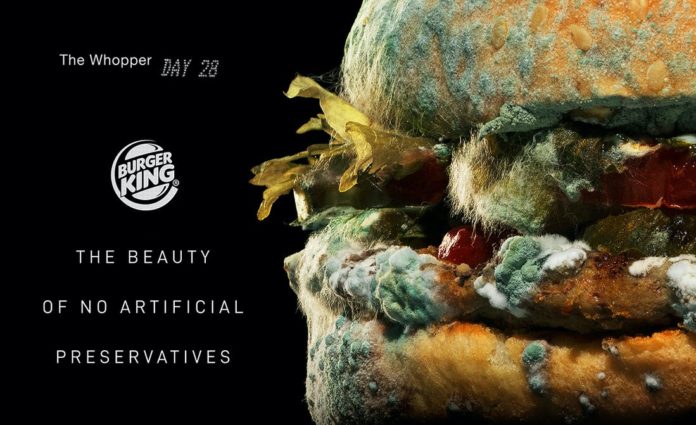 An answer came to the unexpected place in the ad that Burger King released last week, and a Whopper burger kept breaking for 34 days. A chicken burger brand in South Africa compared Burger King’s burger with its own burger.

Burger King, which has thousands of places around the world recently, has made an advertisement to show how natural their burgers are and “do not carry artificial preservatives”. The company released the image of the Whopper burger, which was left intact for 34 days.

Burger King filmed the 34-day deterioration process in its full form, and then shared the final version of the burger with the deterioration process from social platforms. The big food chain did not forget to add an article titled “The beauty of not having artificial preservatives” when publishing the advertisement.

McDonald’s burger had been able to stand intact for 10 years due to the fact that it contains artificial protectors. You can access that photo by clicking this link. Even though Burger King challenged McDonald’s about artificial preservatives, there was another burger who responded this time.

Nando’s, a chicken burger restaurant in South Africa, compared its burgers to Burger King’s burger. Putting the Whopper burgers, which put aside the rotting of Burger King at the end of 34 days, Nando, on the other hand, placed his own burgers 3-4 minutes later.

Nando’s, who did not directly address the burger chain Burger King in his ad, placed a burger called Peri-Peri Chicken Burger in his post. However, Nando’s burger was not visible after 3-4 minutes because it was defeated. Nando’s says this image “0% preservative, 100% delicious. You know it is true. ”

This creative advertisement made by Nando’s reminded us how unexpected and beautiful content the advertisement world can offer. While the content in the advertising world is challenging for other brands, we have a lot of fun.

Whatsapp Is Working On A New Voicemail Feature