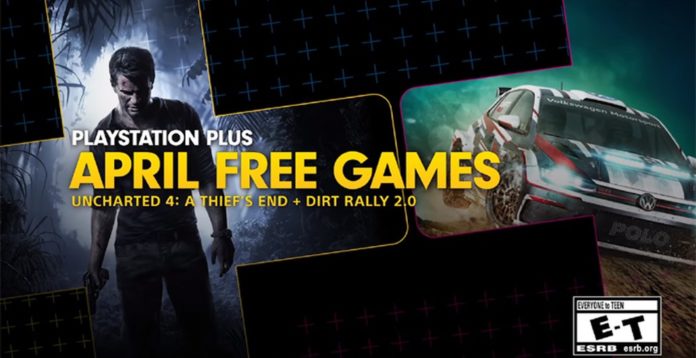 Uncharted 4: A Thief’s End and Dirt Rally 2.0 are the free PlayStation 4 (PS4) games in April for subscribers of Sony’s PS Plus service. Announced this Wednesday (1), the games will be available from the first Tuesday of the month, on April 7 and will remain until May 4. There is still time to redeem the free March titles: Shadow of the Colossus and Sonic Forces. Both are released until the 6th, when they are then replaced. Next, check out more details about April’s free games on the console.

Uncharted 4: A Thief’s End is the fourth and final chapter of Nathan Drake’s saga. The three previous games in the series, originally released on PlayStation 3, are available in a remastered format on January PS Plus in Uncharted: The Nathan Drake Collection.

The new adventure meets a retired Drake, when his brother rises from the dead with clues that can lead him to a legendary pirate treasure. However, they are not the only ones looking for treasure and their journey tests the limits of the hero and the bonds he has formed in his life.

In Dirt Rally 2.0, on the other hand, players only need to worry about crossing the rough off-road courses in the shortest possible time for victory. The game has several systems to make the simulation in a rally event even more realistic. Among the elements are changes by climate, changes in visibility, deformation of the terrain by other cars, deep customization of vehicles and mechanical damage system.

What is Incognito Mode of Google Maps