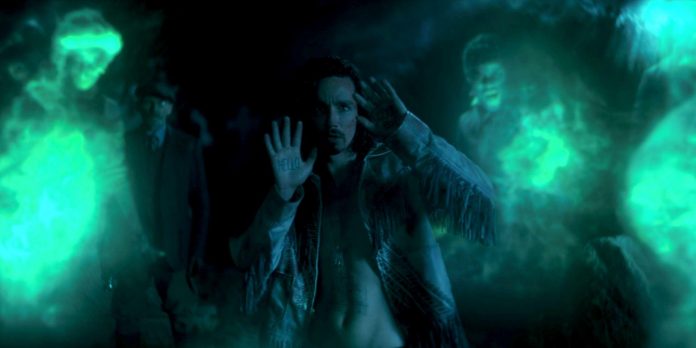 Superheroes are everywhere these days, from comic book pages to the big and small screen and well beyond. While there are a few default models that superhero creators can choose from, the occasional unique power set raises plenty of new questions and interesting possibilities.

Season 3 of Steve Blackman and Jeremy Slater’s adaptation of Gerard Way’s The Umbrella Academy recently premiered on Netflix. The series has been lauded for its unique blend of superhero sci-fi action and dysfunctional family drama, each of which cleverly enhances the other. One of the most interesting aspects of the series is its ensemble cast, and one of its most interesting figures is Number 4, AKA Klaus Hargreeves.

In adapting The Umbrella Academy, Slater and Blackman changed quite a bit about the main cast. Several members of the Hargreeves family underwent some fairly significant changes to their set of superpowers. Diego’s comic book counterpart, for example, actually has the power to hold his breath indefinitely, which never comes up in the series. Conversely, Five’s teleportation powers are actually micro jumps in time which mimic superhuman speed. Klaus is probably the sibling most negatively impacted by the changes, because comic book Klaus is several hundred times more capable than his on-screen counterpart.

Klaus Hargreeves is known as The Séance, and his primary gift is mediumship. Klaus can channel and commune with the spirits of the dead. The usefulness of this ability varies wildly; it’s a very situational superpower. The primary use of Klaus’s medium capabilities is his ongoing relationship with his deceased brother Ben.

In his early life, Klaus served as part of The Umbrella Academy superhero team, but the show never portrays him doing anything of use. He’s at the bank robbery the team stopped early in the show, but he mostly just stands there while his brothers and sister solve the problems. Klaus does eventually get better with his powers, but not for a very long time.

Klaus hates using his powers to commune with anyone except Ben. Unfortunately, Klaus has little to no control over who comes to him, when they appear, or how they approach to beg for help. The spirits of the deceased come to him like violent baleful hallucinations, in one of the best examples of the way the series depicts superpowers as neurodivergence. Klaus developed a crippling fear of the dead after years of abuse at the hands of his father. In addition, the ghosts that demand his attention do so with desperate pleas for help with their various unfinished business. This led The Séance to shun his supposed gifts, discovering in his teenage years that drugs and alcohol numb his brain’s ability to hear their screams. Klaus spent the next decade and a half living life to the fullest, high out of his mind every moment he could possibly be. He only grew to appreciate the capabilities he had after his fateful trip back in time.

Klaus met and fell deeply in love with a young man named Dave while trapped in 1968 and fighting in the Vietnam War. Dave’s tragic death on the battlefield left Klaus with a new purpose. He’d spent his life suppressing his conversations with the dead, but now he can only see his beloved through that cursed power, leading to one of the best subplots of the series. With the self-medication slightly reduced, Klaus’s powers began to flourish. His first moment of success with using his powers to save the day came in the final episode of season one, in which he was able to grant Ben physical presence. His ability to commune with ghosts was upgraded to the ability to summon them into the material plane. This concept is used again in season 2’s opening, in which he summons a small army of ghostly soldiers.

Klaus stagnates a bit for a while, and he does very little of note with his powers throughout season two. Again, his only major success comes from his connection with Ben. He allows Ben to possess his body to approach a woman he likes and, by acting as a conduit, he brings Ben to Viktor. He is able to use a couple of ghosts to break his fall after being launched into the air, possibly saving his life. Klaus is kind of like a bright kid getting through school with Bs and Cs; he really just needs to apply himself. That discipline doesn’t enter his life until late in season three.

After a sudden and disastrous mistake, Klaus discovers that his previous trips to the other side weren’t near-death experiences, but instead multiple instances of his own death. Klaus is immortal, capable of returning from the great beyond after a brief rest within it. Through intensive and horrific training with Reginald, Klaus is able to master his immortality, reducing his returning time to less than a minute. Klaus’s powers evolve from communication with spirits to full reincarnation, with no defined limit. He’s fully obliterated in the third season’s penultimate episode, and he is able to reach his family again without issue.

In what is currently his final form, Klaus is the master of death, capable of walking and talking across the planes with ease. Klaus hasn’t reached the power level of his comic book counterpart, but he’s come pretty far over just a few seasons, and it will be interesting to see him develop further.

Pokémon GO Dates The Community Days Of March, April And May...