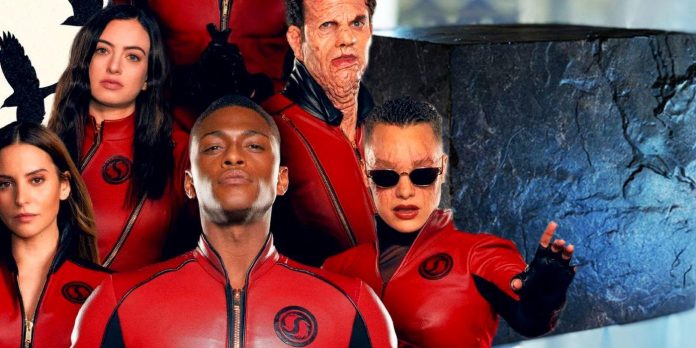 Attention! Contains potential SPOILERS for the third season of The Umbrella Academy.

In the finale of the second season of Umbrella Academy, the new Sparrow Academy is revealed along with the new children who attend it. Reginald Hargreaves decided to choose other children after getting to know Umbrella Academy in the 1960s. He was completely unimpressed with the children he raised, and he decided to start all over again. One of these participants was a floating cube, which turned out to be Christopher Hargreaves.

Christopher, a floating cube, has quite a few abilities demonstrated in the third season of Umbrella Academy. One of his most obvious abilities is his inhuman physiology, manifested in the form of a sentient cube. This state of the cube allows it to break into several different parts, a power that almost helps save the world. Christopher in the 3rd season of Umbrella Academy, episode 7, “Auf Wiedersehen”, can store Kugelblitz inside himself, and the next wave of Kugel comes out of it just a few steps away from him. Although Kugelblitz eventually breaks free, his ability to hold a black hole inside himself for quite a long period of time is impressive. His physiology also gives him a great advantage in combat, as he is not able to speak humanly, but can make audible sounds understandable to his brothers and sisters. This is a great tactical advantage of the Sparrow Academy. It also allows him to establish an emotional connection with his brothers and sisters, even if he cannot speak and is not a person in this form.

His powers are not limited to the shape of the cube. In fact, his strength alone seems similar to Victor from Umbrella Academy. Christopher is able to produce a huge energy explosion so powerful that he knocks the Umbrella Academy team to the ground. Allison can’t even talk about it, because the explosion is too powerful. He also has the ability to control the temperature, turning the room into a freezing cold. Another strength of Christopher is the ability to cause fear. Fear can be so strong that it can actually paralyze a person.

Although little is known about the origins of Christopher, a sentient cube and a member of the Sparrow Academy, the 3rd season of Umbrella Academy demonstrates how powerful he can be from the very first moment in battle. It is capable of emitting very powerful explosions and even holds a black hole inside it. Despite the fact that he died during the 3rd season of Umbrella Academy, there may be more of Christopher in the once again reset timeline, where it will be possible to learn more about his powers and origins.