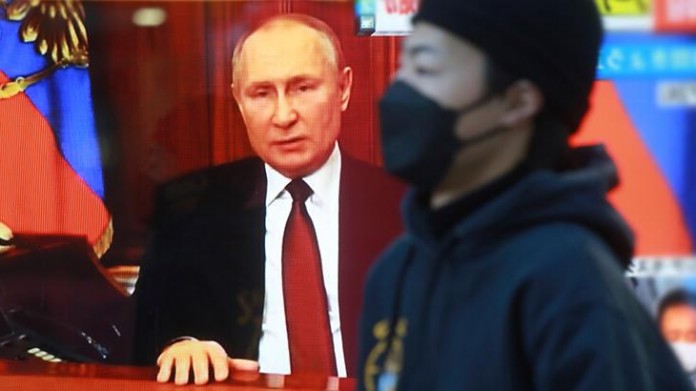 In the statement made by Ukraine, it was said that 8 people were killed and 9 people were injured in the attacks carried out by Russia. In the first statement made by the Ukrainian Army in the morning, “Our air defense system hit a total of 5 planes and 1 helicopter”, while Russia rejected the allegations, describing them as “baseless”. Ukraine announced that 6 Russian planes were destroyed and 50 Russian soldiers were killed in the update it made later on. Stating that nearly 40 soldiers lost their lives in their own armies, the Presidential Advisor of Ukraine announced that dozens of soldiers were injured as well. In the statement made by the Ukrainian Border Forces, it was stated that “Russian troops entered Kiev from the Northern region.” Ukrainian Deputy Foreign Minister Emine Cebbar told Habertürk TV, “There were various explosions in Kiev. Russia has carried out more than 30 attacks since morning.”
Breaking news… Russian President Vladimir Putin announced that they have launched a special military operation in Donbas in eastern Ukraine. Putin urged Ukrainian soldiers to “put down your weapons immediately and return home”.

The Ministry of Emergency Situations of Russia stated that “Ukrainian military plane was shot down, 5 people died”.

According to the news in Reuters, at least 18 people were killed in the attack in Odessa, Ukraine. 6 civilians lost their lives in Brovary.

UKRAINE: 50 RUSSIAN MILITARY KILLED
In the latest statement from Ukraine, it was announced that 2 Russian cargo ships were hit. He announced that 6 Russian planes were destroyed and 50 Russian soldiers were killed.

“Three border guards were killed,” the statement made by the Ukrainian Border Guards Association said.

After a while, the Ukrainian Army said, “Our air defense system hit a total of 5 planes and 1 helicopter.” Russia, on the other hand, dismissed the claims that Russian planes were shot down by Ukraine, calling it “baseless”. The Russian Ministry of Defense also said that Ukraine has disabled its air defense assets and bases.

The Walking Dead: When does the Final Season premiere?

India’s Capital Is Covered With Poisonous Smoke : Schools Are On...