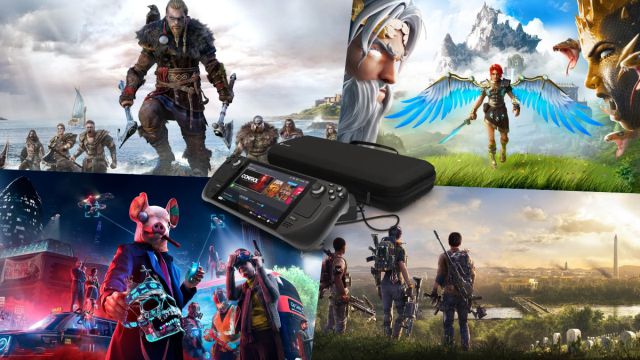 Ubisoft: Valve’s new system is a laptop that runs on the Steam OS operating system; the first units will arrive in December. Steam Deck works like a portable console, but it is actually a PC. Announced by Valve recently, the device is now available for pre-order on the official Steam website, although not all units will arrive in December. During the shareholders’ meeting that corresponds to the results of the first quarter of the new fiscal year, they asked Yves Guillemot, CEO of Ubisoft, if they are considering adapting their games to the Steam Deck. The answer has been that it depends on how it performs in the market, basically.

“We are pleased to see the Steam Deck debut in the industry, showing that there continues to be a trickle of new hardware and innovation hitting the markup,” he said. “We’ll see how it performs, but if it’s big enough we’ll put our games in it.” In short, they will adapt their video games only if the system succeeds in the market.

Anyway, being a PC, the user has the opportunity to install any software available on Steam or in other stores. Valve has already confirmed that even though the device comes standard with Steam OS, nothing prevents installing Windows or other stores, so theoretically games like Assassin’s Creed Valhalla or Watch Dogs: Legion will work from day 1.

Problems with some titles

Unless things change at launch, the Steam Deck won’t be able to run some of the most successful online multiplayer titles on the market. Rainbow Six Siege, Apex Legends or Destiny 2 will be left out due to a compatibility problem between Steam OS and the anti-cheat systems that incorporate this title. However, Valve has officially communicated that they are working on it, so we will have to wait and see if they can solve this problem or not.

Steam Deck will be launched in three different models, which do not differ in the hardware itself beyond the hard drives and other premium improvements in the more expensive models.

Cyberpunk 2077 mod puts race on the back wall