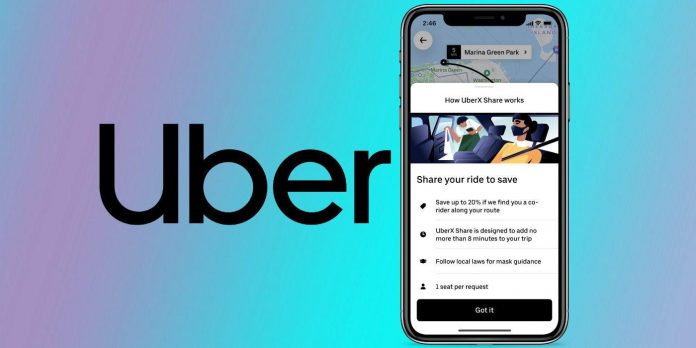 Uber has resumed joint trips in several US cities amid rising gasoline prices and the cost of trips. The move comes more than two years after the company suspended its Uber Pool car-sharing service at the start of the pandemic as a safety measure. It was back in March 2020, when a car filled with a bunch of people from different households would have made it impossible for everyone to comply with the norms of social distancing. However, two years later, as the world tries to get rid of the pandemic, Uber is reintroducing the car-sharing feature, albeit with some changes.

Uber is one of the largest and most well—known ride aggregators operating in dozens of countries around the world. In the US, the company’s biggest competitor is Lyft, which offers taxi services, food delivery and other services in hundreds of cities across the country. Nevertheless, Uber remains the largest taxi service not only in the United States, but also worldwide, operating in 72 countries and serving more than 10,000 cities. Restarting the car—sharing service is good news for many Uber users, as it will help them save some money when traveling.

On Tuesday, Uber announced the official launch of its new car sharing service UberX Share. The new feature, which will unite riders moving in the same direction, was initially tested in Miami last November. According to Uber, the new service will offer not only a more affordable and efficient option for passengers and drivers, but also more environmentally friendly due to the reduction of emissions per passenger. Currently, the service operates in several metropolitan areas, including New York, Los Angeles, Chicago, San Francisco, Phoenix, San Diego, Portland, Indianapolis and Pittsburgh. The company says it plans to expand UberX Share to more cities this summer.

As for how the program will work, Uber says that customers who choose the UberX Share service will receive a pre-discount, as well as a 20 percent deduction from their account if they are matched with another rider on the route. According to the official FAQ page on Uber’s website, the upfront discount will be five percent of the total bill, regardless of whether the driver matched up with someone else or not. In addition, they will also receive $2 in Uber Cash, which can be used on the next Uber ride or when ordering through Uber Eats.

There is another difference between Uber Pool and UberX Share. While Uber Pool allows users to book up to two seats, UberX Share allows users to book only one seat. However, there will be some positives compared to the Uber Pool. For example, to avoid delays, the company will pick up only passengers traveling in one direction, which means that there will be no long detours for boarding and disembarking other passengers along the way. Uber also reports that passengers who choose UberX Share will not be delayed by more than eight minutes compared to a standard UberX ride.