Home Entertainment Tyrant vs Nemesis: Which monster from Resident Evil Remake is better? 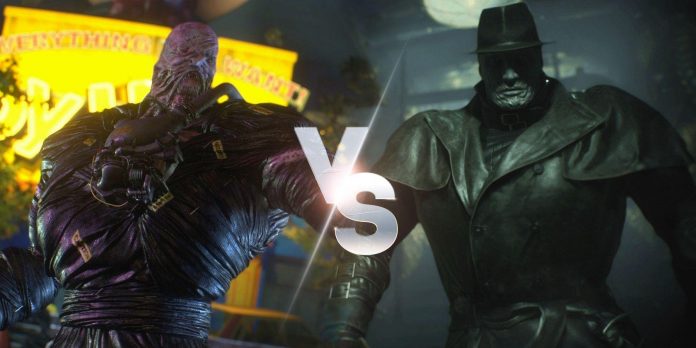 Resident Evil 2’s Tyrant and Resident Evil 3’s Nemesis have a lot in common. Both are bio-organic weapons created by the Umbrella Corporation to carry out specific objectives. They harass the protagonists of their respective Resident Evil games with their powers and imposing presences. Sadly (and unfortunately), both are inevitably defeated by the end of their stories.

Even though the Tyrant and Nemesis prowled Raccoon City at roughly the same time, their different goals and untimely demises resulted in the two bio-organic weapons never meeting. The Tyrant mostly stayed in the Raccoon City Police Station as well as the sewers and secret Umbrella lab below it. This was so that it could successfully obtain a sample of the G-Virus and eliminate any survivors. Nemesis, on the other hand, was relegated to the commercial district of the city where it would hunt down former S.T.A.R.S. members Jill Valentine and Brad Vickers. Once Jill escaped the district, Nemesis followed her through the city and into another Umbrella facility hidden below the local hospital. While it is a shame that the two never got to meet, it is still interesting to compare and contrast the Tyrant’s and Nemesis’s abilities to see which Resident Evil enemy one would come out on top.

In order to carry out their goals efficiently (most especially the ones that involve killing), both the Tyrant and Nemesis were created to be lethal machines. The Tyrant’s body is extremely large and resistant to damage from firearms and other types of projectiles. While the Tyrant isn’t particularly fast, it backs up its huge frame with monstrous strength that it uses as a means of attack. Once it closes the distance to its target, the Tyrant uses hand-to-hand combat to make short work of anything it hits.

Nemesis, being the more advanced bio-weapon, has a few more tricks up its sleeve. In addition to the strength, high damage resistance, and hand-to-hand capabilities of the Tyrant, the Nemesis is also extremely fast. It can easily chase down its prey with a few steps or leaps and close the distance in a matter of seconds. The Nemesis can also wield a variety of large weapons, ranging from a flamethrower to a rocket launcher, all the way to a minigun. In the small chance that the Nemesis doesn’t want to kill its target, it can also infect subjects with its tentacles.

Winner: Nemesis – Seeing as it has the edge over the Tyrant in terms of speed and the number of things it can do, the Nemesis is the winner when it comes to lethality.

Fashion Sense And Ability To Blend With Society

Although subtlety isn’t one of the things the Tyrant and Nemesis are good at, it is in the Umbrella Corporation’s interest that it hides its connection with any of its bio-weapons. To this extent, it has employed a number of measures to hide the more grotesque features of its experiments. At first glance, the Tyrant just looks like a large man wearing a trenchcoat, boots, gloves, and fedora hat. However, getting a close look at its grey skin and dead eyes helps to give away its monstrous nature.

Unlike its original Resident Evil 3 counterpart which was clad in leather, the Nemesis in the remake is covered in what looks like biohazard trash bags. These coverings peel off as Nemesis sustains damage and starts to mutate. By the end of the game, Nemesis’ true form is bared for all to see. While the Nemesis can speak (which would give it an edge over the Tyrant in terms of mimicking human behavior), it can only say the word “S.T.A.R.S.” over and over in a menacing voice.

Winner: Tyrant – The Tyrant gets this one on account of its more human-like appearance and dapper look.

More Than Meets The Eye

As both bio-weapons take damage, they undergo transformations to better deal with dangerous situations. After hunting Leon Kennedy throughout the police station, sewers, and Umbrella lab, the Tyrant transforms into the Super Tyrant – a more mangled version with a missing lower jaw and a mutated claw for a right arm. The Tyrant uses the claw to slash and stab its targets, with the latter being strong enough to eliminate a foe in a single hit. It isn’t the most visually striking transformation in the Resident Evil universe, but it provides the Tyrant with the strength it needs to be considered a final boss.

Nemesis undergoes two transformations throughout the Resident Evil 3 remake. In its second form, the Nemesis becomes larger, grows talons all over its body, and begins walking on all fours. This allows it to quickly chase Jill like an animal before pouncing on them for the attack. Later on in the Umbrella facility, the second form also provides Nemesis with a tentacle-like appendage that it uses to grab and attack its targets. Nemesis’ third and final form has it turn into a giant wall of malformed meat and tentacles. Nemesis uses these tentacles to perform wide sweeps and grabs to attack Jill – dealing a lot of damage. It isn’t the Nemesis’ most flattering form, but it does provide Jill with something to shoot her newly acquired Railgun at.

Winner: Nemesis – Nemesis wins this on the simple fact that it has an extra form over the Tyrant.

Though both bio-weapons failed to accomplish the tasks given to them, these objectives are worth mentioning to see how well the monsters fared. The Tyrant’s goal was to get a sample of William Birkin’s G-Virus and eliminate any survivors. It failed in its first goal when the G-Virus sample fell out of Ada Wong’s hands and into the abyss below the Umbrella facility. As for the second goal, while it did manage to kill reporter Ben Bertolucci in the police station holding cells, it never did eliminate Leon, Claire, Sherry Birkin, or Ada Wong.

Nemesis’ sole directive was to eliminate any surviving S.T.A.R.S. members in Raccoon City, which by the events of Resident Evil 3 were just Brad Vickers and Jill Valentine. Brad Vickers was killed by a pack of zombies at the beginning of the game, leaving Jill the Nemesis’ only target. Thanks to Carlos Oliveira and her skills as a S.T.A.R.S. officer, Jill was able to get the upper hand on the Nemesis and kill it instead.

Winner: Tyrant – The Tyrant managed to partially complete its goal of killing survivors in Raccoon City. Nemesis didn’t even manage to kill one S.T.A.R.S. officer and was outdone by a pack of zombies.

Both the Tyrant and Nemesis have their strong and weak points, but ultimately it’s a toss-up as to which bio-weapon is better. The Umbrella Corporation spent a lot of money and resources to make these monstrosities to sell to the highest bidder, and though they can be focused on their goals, the presence of a couple of meddling humans seems to thwart them every time.

Razer’s headquarters looks like one of Its gaming peripherals