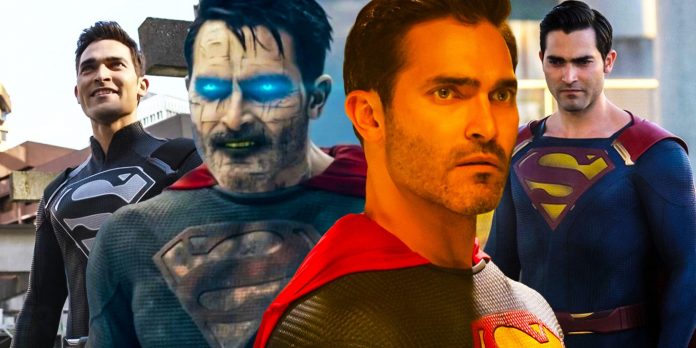 Tyler Hoechlin has played five different versions of Superman, and each has own different origins and personality. Superman & Lois’ season 2 finale came with a major revelation that the show does not actually take place on the Arrowverse’s Earth-Prime. This news has drawn a wide range of reactions from both Superman and Arrowverse audiences, some disappointed that the show was cutting itself off from the Arrowverse and others surprised that it took Superman & Lois so long to break that news with how loose, at best, its Arrowverse connections had already been.

By declaring itself separate from the Arrowverse, Superman & Lois also, by extension, confirmed that the Man of Steel Tyler Hoechlin portrays on the show is a different one from the Superman he’d played in his Arrowverse appearances on Supergirl and the Crisis On Infinite Earths CW event. With Crisis rendering DC reboots meaningless and ushering in the multiverse era of co-existing parallel movie and TV continuities, Hoechlin playing two different Supermen is not a problem. However, Hoechlin’s Superman tenure is even more extensive than that.

With the different stories of parallel Earths he’s been involved in on the CW, Hoechlin has set a Superman record with the five Men of Steel he has played. While Superman & Lois is where he has primarily donned Kal-El’s red cape, Hoechlin’s other versions of the Last Son of Krypton have each been equally important characters in his performance as Superman. Here are the five different versions of Superman that Tyler Hoechlin has played.

Tyler Hoechlin debuted as the Man of Steel as a recurring character on Supergirl, with Hoechlin also being one of three Supermen on the Crisis On Infinite Earths crossover (alongside Brandon Routh and Tom Welling.) As a supporting character, Hoechlin’s Arrowverse Superman frequently acted as a big gun in team-ups with other heroes, and delivered a lot of quippy, light-hearted banter with his cousin Kara Zor-El (Melissa Benoist). Hoechlin’s Arrowverse role also introduced Elizabeth Tulloch as Lois Lane, with Hoechlin embodying a genuinely upbeat version of Superman, winking at civilians after saving them from drone fire and comedically asking one thug, “See, now, if the bullets don’t work, right, why the punching?” In the aftermath of Crisis On Infinite Earths creating the Arrowverse’s Earth-Prime (intended to consolidate all of the Arrowverse shows into one universe), Hoechlin’s Superman was one hero brought into Earth-Prime along with becoming a member of its Justice League.

In addition to his primary Arrowverse Superman, Hoechlin also portrayed an imposter who took on his likeness in the form of the villain John Deegan. This occurred during the 2018 Elseworlds crossover. Former psychiatrist John Deegan (Jeremy Davies) escapes from Arkham Asylum in pursuit of a relic known as the Book of Destiny, enabling him to alter reality to his every whim. This resulted in such changes as Stephen Amell’s Oliver Queen becoming the Flash and Grant Gustin’s Barry Allen becoming Green Arrow, while Deegan took on the appearance of Superman in a black suit. With the help of the actual Superman, John Wesley Shipp’s early ’90s Flash, and the other Arrowverse heroes, Deegan’s counterfeit Superman was ultimately defeated, but still gave Hoechlin a chance to play a much more sinister version of the Man of Steel.

Superman & Lois establishes that its version of Superman has acted as a hero for 20 years, even wearing a suit designed after the ’40s Max Flesicher cartoons in his early days, along with a redesigned Arrowverse Superman main suit. After Clark reveals his secret to Lois, they get married and have fraternal twin sons Jordan (Alex Garfin) and Jonathan (Jordan Elsass). Superman & Lois shifts Clark’s primary setting from Metropolis back to his home town of Smallville, with Clark battling the challenges of raising two teenage boys alongside villains like his half-brother Tal-Rho (Adam Rayner) and Ally Allston (Rya Kihlstedt) in the form of Parasite. Superman & Lois also brings in many supporting characters of the Superman mythos, including his one-time girlfriend Lana Lang (Emmanuelle Chriqui) and future Steel John Henry Irons (Wole Parks). With Superman & Lois moving into season 3, Hoechlin’s really gotten to showcase his talent for the Last Son of Krypton more than ever on the show, and Superman audiences are clearly eager to see more of his adventures.

Though only seen in flashes on the show, the black-suited Superman Hoechlin also portrays in Superman & Lois season 1 is nonetheless a pivotal component of the show’s story as a villainous version of the Man of Steel. John Henry Irons arrives on the Earth of Superman & Lois from a different universe, one in which his Superman became corrupted and killed Lois Lane, who was married to John in his world, before rampaging through the world in a black version of his suit. This led John to believe that no Kryptonian could be trusted, with John determined to eliminate Superman upon his arrival to Earth. Ultimately, John was convinced of Superman’s pure nature and by the end of Superman & Lois season 1 had become his close ally with John’s superpowered Steel suit helping him aid Kal-El. Hoechlin’s appearance as the bad Superman of John’s world have been very compartmentalized on Superman & Lois, but nonetheless show him as a flying Terminator with heat vision, very much the opposite of Hoechlin’s main Superman on the show.

Though Superman & Lois teased Doomsday as the big bad of season 2, the powerful being emerging from the Smallville mines in a containment suit was revealed to be Superman’s doppelgänger Bizarro. With Bizarro having gone through many iterations in both the comics and different Superman adaptations, Superman & Lois reveals him to be the Man of Steel of the Bizarro World, in which his lavish treatment as a celebrity caused great friction in the Kent family. The Bizarro Jonathan in particular became bitter and rebellious, eventually joining with Ally Allston’s plot to merge the Bizarro World with Earth. Bizarro was also a much more ruthless hero than Superman, and was determined to kill Ally in order to stop her plan, but ultimately died by the hand of Ally’s associate General Mitch Anderson (Ian Bohen). Bizarro’s appearance on Superman & Lois is also a picture perfect recreation of his comic book look, with both he and Superman himself even having parallel Old Boy-inspired one-shot fight scenes in the episode “Tried and True.”

With Superman & Lois season 3 coming, it’s not impossible that Hoechlin might don the suit of another incarnation of Superman within DC’s Multiverse. The theoretical resurrection of Bizarro or Hoechlin’s two main Supermen meeting before the Arrowverse likely wraps up with The Flash season 9 could also show him as multiple versions of Kal-El in one story once more. Whatever lies ahead for Tyler Hoechlin’s Man of Steel on Superman & Lois, Hoechlin’s portrayal of five versions of Superman is quite an impressive accomplishment.