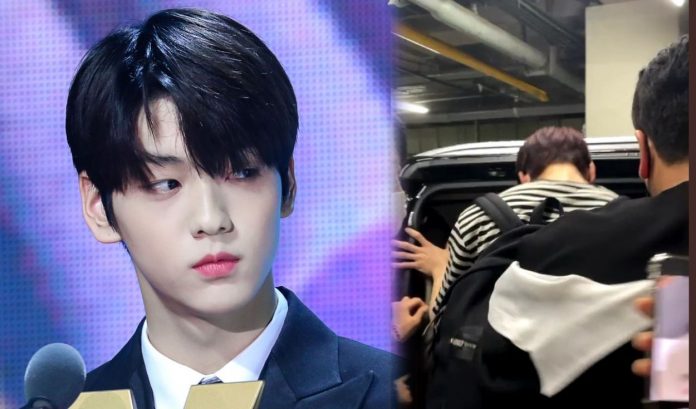 TXT’s Soobin reportedly attacked by the manager, fans demand retaliation from BIGHIT MUSIC. The fandom MOA is mobilizing for the purpose of the agency firing the aforementioned staff. They also demand protection for TXT in the face of a new incident with sasaengs.

A video of Soobin, leader of TXT, suffering an accident at the exit of Music Bank causes a stir among fans and tarnishes the successful comeback of the group with “Loser = Lover”. In addition to showing the lack of protection of the idol from the stalkers, it would have registered the aggression that a staff member committed against him, as the fans denounce.

The worker in question would be a manager of the K-pop boyband, who, according to records and testimonies of people in the place, pushed the 20-year-old idol causing him to hit his head hard when getting into a vehicle. Said person was also recorded being aggressive towards other members of the staff.

The siege of sasaengs (extreme followers) at the exit of the musical program would also be related to this incident and another that Beomgyu suffered in the same location, the fandom claims.

Faced with this situation, MOA at an international level mobilizes through the internet through the hashtag #PROTECT_TXT, which remains in the trends of social networks, and by sending mass emails to BIGHIT MUSIC.

In their message to the company, the TXT fandom demands greater care towards artists and that action be taken regarding the stalkers, especially those who besieged member Beomgyu in the bathroom.

Likewise, and with videos of the event as testimony, they demand the dismissal of the manager, whom they accuse of assaulting the famous 20-year-old Korean, who is currently an MC of the aforementioned Music Bank program.

Here, the complete translation of your request.

“On behalf of the Tomorrow X Together fanbase, MOAS, we want to draw your attention to a disturbing video showing a staff member physically assaulting Soobin. In the video, the person is shown pushing Soobin into a car. While doing this, Soobin’s head hit the top of the car.

We are sending an email to demand that the staff member be fired and that any action that harms the well-being of their artists does not go unpunished. We are also calling for something to be done with the sasaengs, who have been shown to harass the members on multiple occasions.

We want something to be done immediately. This behavior is unacceptable, no one deserves to be physically hurt by someone else’s anger. Protect your artists.

We also want to talk about how a sasaeng @ / fruityb313 who at one point followed Beomgyu to the bathroom and tried to take pictures of her. This sasaeng is still allowed on his fan calls and fan signatures. We require you to be blacklisted from any TXT event in the future. To keep members safe. Thanks”. 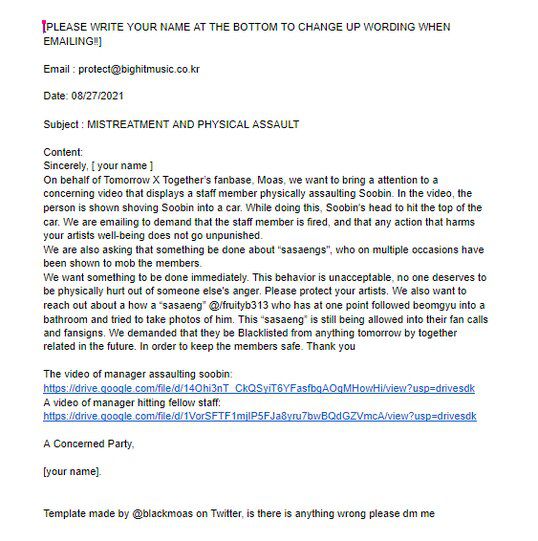 The original email template is available at the following link:

Choi Soo Bin is a Korean singer, rapper, dancer, songwriter, and MC. He was born on December 5, 2020, so he is currently 20 years of international age.

He debuted in the K-pop world as a lead member of TXT in 2019. His release theme was “CROWN.”

In addition to being a singer, dancer, rapper, and MC, Soobin has shown his talent for songwriting. Some of his works in this field are “Maze in the Mirror” and “ Ghosting ”, 2020 songs from TXT.