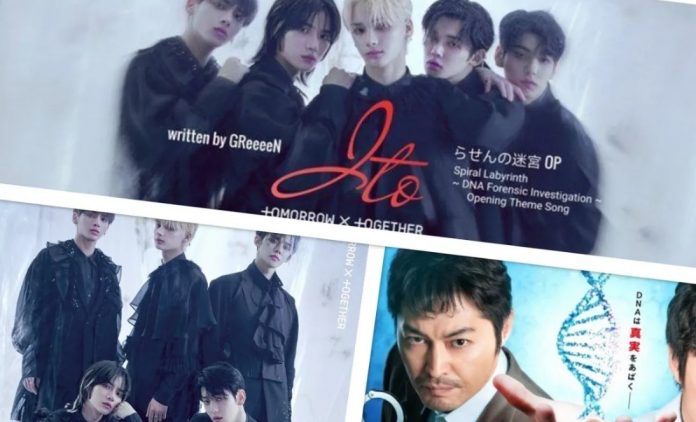 TXT’s Chaotic Wonderland To Be Part Of Japanese Drama ‘Spiral Labyrinth’ OST With ‘Ito’. TXT is ready for their comeback in Japanese and although it is still a little while away to release it, the idols will be teasing a bit of this upcoming album with the song ‘Ito’, which is part of the OST of a Japanese drama.

And they shone even more having their concert ‘ACT: BOY’ which, although it could not be in person, moved MOA with the best songs and choreography of Tomorrow X Together ; This boy band has much more in store for their fans who were surprised to learn that the group would have a Japanese comeback this year.

With ‘Chaotic Wonderland’ , TXT has a new concept and also new songs and although it is still missing for the release of this album in Japanese, the band will advance one of their tracks to be part of the soundtrack of a new J-Drama .

TXT IS PART OF THE OST OF THE NEW JAPANESE DRAMA SPIRAL LABYRINTH, PREMIERING THE SONG ‘ITO’

Tomorrow X Together will premiere the song ‘Ito’ from their upcoming Japanese album ‘Chaotic Wonderland’, especially for the OST of a new Japanese drama called ‘Spiral Labyrinth – DNA Forensic Investigation’ ; next October 15 will begin issuing the drama and ‘Ito’ will be opening of the same.

TXT has already been part of the OST for Japanese productions , as in the anime ‘World Trigger’ with their song ‘Force’, this time they will be opening a drama , something very special and important.

WHEN DOES TXT’S CHAOTIC WONDERLAND PREMIERE?

Although this next October 15, with ‘Ito’, we will have a preview of ‘Chaotic Wonderland’ , TXT’s Japanese EP is released until November 10 , it will be when we can enjoy the full album and all its songs; MOA has everything ready for this launch.

It’s only a few days to hear TXT’s new Japanese song , and we hope the time flies until November 10 to hear ‘Chaotic Wonderland’ in full.

Red Dead Redemption 2: This Is Crazy Mod Integrated Into Twitch...