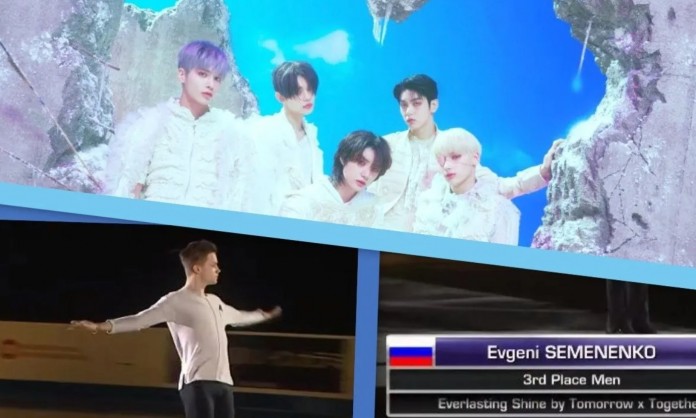 Tomorrow X Together inspires skater Evgeni Semenenko to include them in his figure skating routine, what songs did this new MOA member choose?

Each member of TXT has put all the effort and great dedication of her in the work, as artists give their best for MOA with their different releases that manage to impact the public; Their fandom is getting bigger and bigger thanks to the excellent music they have presented for K-Pop fans.

Tomorrow X Together is a young band, but it has quickly achieved achievements from groups that have been in the industry for many more years, positioning themselves as one of the most relevant boy bands of the moment and winning more and more hearts of people around the world.

It is common to find more and more members of MOA, a fanbase that is responsible for supporting and showing all their love for TXT, who are dedicated to all kinds of things and are of different nationalities, but they are united by the same love for the idol group.

Now we know that a professional skater is part of MOA as well and is inspired by TXT idols for his routine, this is how this group comes to the world of sports.

Evgeni Semenenko is a figure skater from Russia, despite being very young, since he is only 18 years old, his work as an athlete has led him to be widely recognized both in his country and around the world, MOA’s surprise was when they discovered that this athlete is inspired by TXT for his routine.

Evgeni added some K-Pop songs to his figure skating routine and so introduced himself, showing that he is a huge fan of Tomorrow X Together and that he draws inspiration from them for his work.

WHAT TXT SONGS DID EVGENI SEMENENKO USE IN HIS ROUTINE?

‘Eternally’ and ‘Everlasting shine’ were the TXT tracks that Evgeni Semenenko used for his skating routine, two very soft songs that show a very sensitive side of the idol group artists, with this one it is possible to dance to the warm rhythm of both themes.

Definitely this new member of MOA will be supported by the fandom and it is nice to know that the positive impact of TXT on various people is growing more and more.

Kingdom Hearts 4 must return technical points along with KH2 reaction...