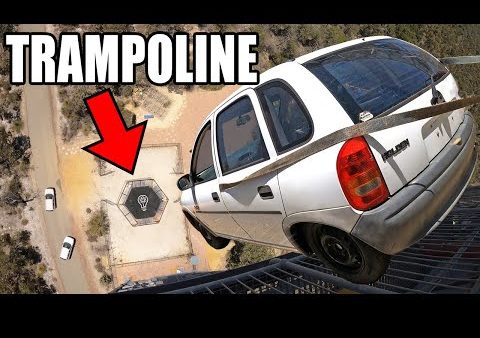 YouTube channels called Mark Rober and How Ridiculous made the world’s most powerful trampoline and threw cars onto it. YouTubers also left a boat on the trampoline, not just by car.

Many strange videos of cars have been shot so far. It is the first time we see a car being thrown into a huge trampoline, throwing a burning vehicle into a frozen lake, making watches from auto parts.

A YouTuber named Mark Rober includes all kinds of science-related content on his channel. This time, YouTuber has taken one of the most interesting experiments in the world by taking a car to a very high tower and throwing it on a huge trampoline. Rober, working with his friends for his experiment, made the world’s most powerful trampoline.

The trampoline was designed in a CAD program and its construction used 144 garage doors and a thick Kevlar mat, each capable of carrying 200 kilograms. Tests started after the trampoline was installed. They threw everything from watermelons to bowling balls on the trampoline. Then it was time for the car.

Mark Rober worked with a YouTube channel called How Ridiculous in this crazy experiment. As a result, the car jumped on the trampoline and the experiment was successfully carried out. The two did not settle with the car and launched a boat on the trampoline.

Moments when the car is thrown into a trampoline:

Video of the boat was thrown:

WhatsApp: Discover how to chat from your TV

Astronomers Discover Fast Radio Explosion in a Nearby Galaxy