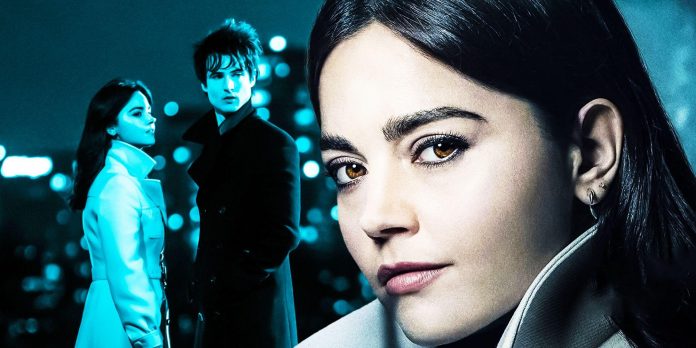 Warning: SPOILERS for The Sandman Episode 3 – “Dream A Little Dream Of Me” and Episode 6 – “The Sound Of Her Wings”

In The Sandman episode 3, Dream of the Endless (Tom Sturridge) comes to Johanna Constantine for help to recover one of his lost symbols of office, his bag of dream sand. It turns out Constantine once possessed the sand but she left it with her former lover when Johanna vanished and ended the relationship. Against her wishes, Johanna acquiesced and confronted her ex once more but tragically found Dream’s magical sand had left her barely alive and in a state of perpetual dreaming. To spare the woman further torment, Morpheus retrieved his sand and allowed Johanna Constantine’s lover to rest in peace. Dream then rid Constantine of the Newcastle nightmares that have plagued her sleep for years as a thank you for her help.

Related: Every Name And Title Dream Has Had In The Sandman

Surprisingly, a different version of Johanna Constantine appears in The Sandman episode 6. Dream made one mortal friend throughout the centuries: an Englishman named Hob Gadling (Ferdinand Kingsley) whom Dream’s sister, Death (Kirby Howell-Baptiste), granted immortality. Morpheus and Hob meet at the same pub every hundred years but, in 1789, they were interrupted by Lady Johanna Constantine. This 18th-century member of the Constantine clan mistook Dream and Hob for the Devil and the Wandering Jew and demanded the gift of immortality. Ingeniously, Lady Johanna is also played by Jenna Coleman, making Lady Johanna the spitting image of her namesake in the 21st century.

Although John Constantine appears in The Sandman comics, the 21st century Johanna Constantine replaces John entirely in Netflix’s The Sandman. Either way, Lady Johanna is John Constantine’s (and Johanna’s) ancestor. John’s haunted history involving Astra Logue was simply transferred to Johanna, as is the story of Constantine’s ex-lover who happened to possess Morpheus’ bag of dream sand. Jenna Coleman’s Johanna retains John’s magical abilities but The Sandman upgraded her into a successful exorcist who counts the Queen of England and the Royal Family as her clients. This is a far cry from how John Constantine is perpetually scraping by trying to make ends meet in the comics and his other media incarnations.

The switch was made out of necessity because the legal rights to John Constantine are held elsewhere. After Matt Ryan’s John Constantine’s tenure in Legends of Tomorrow ended, the character is presently earmarked to appear in an HBO Max Justice League Dark TV series being developed by J.J. Abrams’ Bad Robot production company. In turn, The Sandman has replaced John entirely with Johanna, who is essentially the female version of the same character with some notable tweaks. As such, John Constantine will likely not appear in The Sandman at all, and rather, it’s safe to expect Johanna to pop up again in future seasons.

Meanwhile, Lady Johanna Constantine also appears in The Sandman comics (and now in the Netflix series) because she is Neil Gaiman’s creation in tribute to Alan Moore. In the comics, Lady Johanna is John’s 18th-century ancestor. The daughter of Lord and Lady Constantine, Johanna was orphaned and left penniless when she was young, but she regained her fortune and title in 1785 after King George III tasked the adventurer with retrieving Pandora’s Box. Restored as Lady Johanna Constantine upon her success, she was given Blackwood Manor, which she renamed Fawney Rig. In 1789, Lady Johanna found Dream of the Endless and Hob Gadling at their annual meeting and believed them to be the Devil and the Wandering Jew.

Related: Why John Constantine Isn’t In The Sandman

A hundred years after their fateful meeting with Lady Johanna in 1789, Morpheus told Hob that he saw Lady Constantine afterward. Johanna did “a job” for Dream and “succeeded admirably.” This will likely be depicted in a future episode of The Sandman, but the story was also told in Neil Gaiman’s comics. In 1794, Morpheus came to Fawney Rig and recruited Lady Johanna to rescue his son, Orpheus, during the French Revolution. Constantine did indeed “succeed admirably” and saved Orpheus, who is Dream’s offspring with the Muse, Calliope. It’s likely Calliope will appear in The Sandman season 2, and her romance with Morpheus as well as the tragedy of their son, Orpheus, are also tales to be told in later seasons of The Sandman. However, given how The Sandman has intriguingly changed some details from the comics, it’s possible Lady Johanna in the 18th century and Johanna Constantine in the present day will be back as well.

What does a Guilty Plea mean for RHOSLC star Jen Shah

Excerpt from World of Warcraft: Amazon does not inspire hope for...