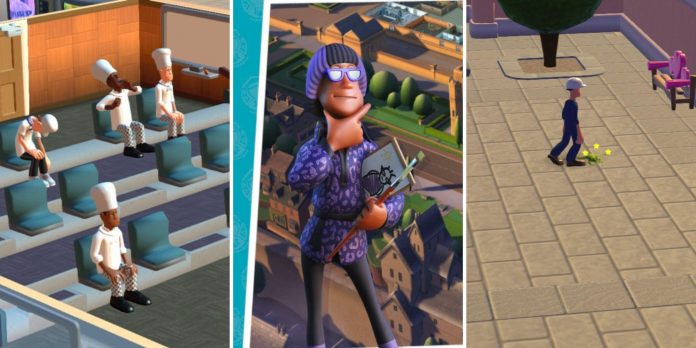 Two Point Campus is, of course, closely related to its predecessor, and Two Point Hospital fans will enjoy this new entry to the series. The two games share some distinctive features: core gameplay mechanics, a friendly, light-hearted aesthetic, and a silly sense of humor. There are also some hidden easter eggs and in-jokes from Two Point Hospital, which can be uncovered by fans as they progress in Two Point Campus.

RELATED: Two Point Campus: How To Upgrade A Course

From posters of famous characters to identical items to silly jokes made over the Tannoy system, here are just a few of the easter eggs that can be spotted by eagle-eyed Two Point fans.

There are a few items from Two Point Hospital that appear in Two Point Campus – hand sanitizing stations, bins, vending machines – but one item that should feel very familiar to most Hospital players is the Sunflower.

The Sunflower greatly improves hospital attractiveness. It’s one of the most effective decorative items in the first game (along with the Rosebush). Many players dotted their hospitals with Sunflowers, and it has a similar effect in boosting the room level in Two Point Campus. It’s an easy way to make a room look (and feel) nicer, as long as staff members keep on top of the watering.

Admittedly, this is more of an obvious entry. One of the best things about Two Point Hospital is the general silliness, and the names of patients and staff members are a big factor. Many players hire staff members based on name alone (although this might not be the best strategic choice).

Silly names are back with a vengeance in Two Point Campus. Trying to encourage a budding relationship between Clary Comfortable and Mutiny Gob should raise a smile or two, and many players will continue the tradition of hiring professors with the silliest possible name combinations.

Bank loans are back! The saving grace of many a struggling hospital, bank loans are very useful when players are facing a cash shortfall. After all, building a Robotics Department doesn’t come cheap, and it takes a while for tuition money to start rolling in.

RELATED: Best Walking Simulators That Everyone Should Play

Players can borrow from the same banks as they would have done in Two Point Hospital: Two Point Bank, Swindles, and Smell My Cash. They’ll need to keep an eye on those interest rates, though (especially if they decide to go for the big loan from Smell My Cash). Repayments can be a killer when players are struggling for cash at the end of each month.

Players of the Two Point Hospital DLC Culture Shock may remember hosting the actor Roderick Cushion. Roderick plays a doctor in the Plywood Studios hospital, and players are tasked with creating a hit medical drama based on his adventures in healthcare.

Roderick is back in Two Point Campus, in the form of a poster. Players can use Kudosh to unlock this poster early in the game, and the presence of any kind of wall decor helps to level up a room. It’s a nice little nod to washed-up TV star Roderick, and players can create entire rooms plastered with his face. Players can also find posters of other characters, including a poster of an album cover from the Two Point popstar Jasmine Odyssey, whose songs appear regularly in Two Point Hospital.

There are many weather events in Two Point Hospital, ranging from mildly interesting to deeply annoying (meteor showers, anyone?). Frog rain appears in the Pebberly Island DLC, and as the name suggests, involves a sudden, and short-lived storm of frogs.

Frog rain is an occasional event in Two Point Campus, too. Players may find dazed frogs lying around the campus, which will have to be picked up and sent away by janitors, making the campus look much nicer. Where the janitors are actually sending the frogs remains a mystery.

The Tannoy is a Two Point staple, offering a blend of silly one-liners and genuinely useful announcements. In Two Point Campus, the Tannoy returns, with the same sardonic voice as the previous game.

RELATED: Two Point Campus: How To Speed Up, Pause, And Slow Down Time

The Tannoy will occasionally interrupt the radio show, which is also fun to listen to, with sarcastic announcements (‘Students are reminded that I am not your mother’). From time to time players may notice a special Tannoy announcement: ‘Doctor, please return to the hospital. Thank you.’ A cheeky nod to the first game (although the doctor hasn’t actually been spotted on campus so far).

In Two Point Campus, Mitton University returns! In this game, it is presented as a prestigious university building in need of an upgrade. Players will need to return the campus back to life by creating Robotics facilities, and they can teach Internet History courses to students, too. It’s nice to see a familiar setting returning again, albeit in a different form, and it’s fun to add some modern twists to the old building.