Home Tech Twitter Works on Response to Tweets with Emoji 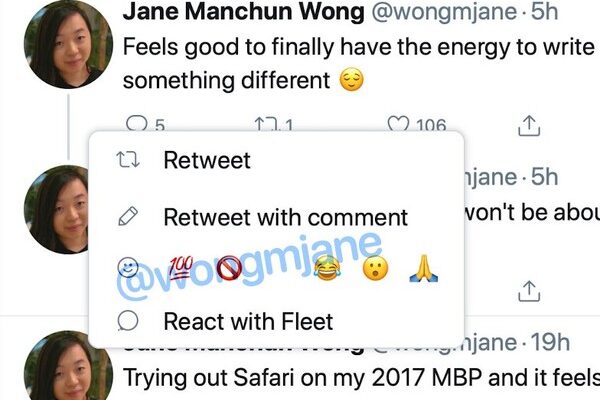 Reverse engineering expert Jane Manchun Wong has revealed a new feature that Twitter is working on. The feature to react with the emoji that we are familiar with on Facebook and Instagram will come to Twitter.

As one of the most popular online channels in the world, Twitter is working on a feature that will add a new atmosphere to the interaction between users. Jane Manchun Wong, who has revealed many social media platform features that are still under development, has revealed that the feature of reacting with the emoji we see in many social media platforms will come to Twitter.

In the new feature of Twitter, unearthed by Wong, you will see a small dropdown menu and you can react to the tweet by choosing one of the emojis in this menu. It is possible to reach the popup window from the retweet button.

We also see that there is a “React with Fleet” button on Twitter’s new openable menu. As you know, Twitter is currently testing Instagram Stories with a small audience, and this button is thought to be related to this ‘stories’ feature, but for the moment, its full functionality is unclear.

It is not yet known when the new feature discovered by Wong will be available. It should also be noted that Twitter developers are at the test stage, and they have the possibility of giving up this feature.

Flamengo and CAP will release their game on Sunday