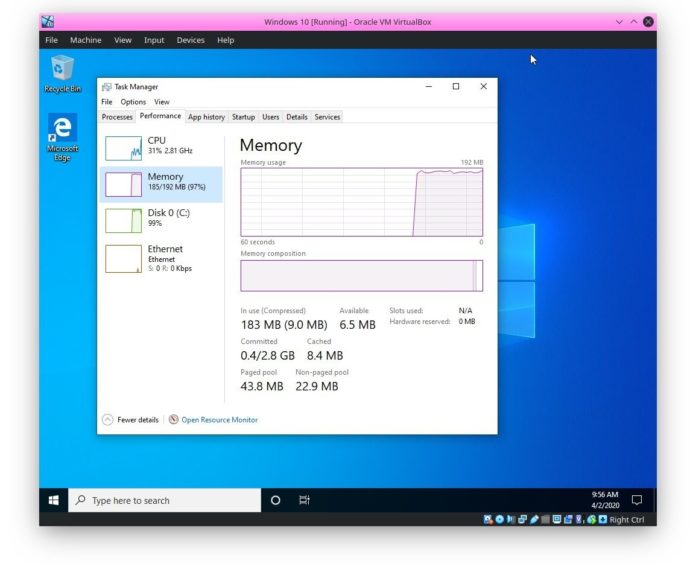 A Twitter user signed an interesting Windows 10 experiment. The user named Nori managed to run Windows 10 with 20 percent of the amount of RAM recommended by Microsoft for Windows 10.

A person named Nori user on Twitter is running Windows 10 using a virtual machine. Nori is trying to run the 32-bit version of Windows 10 with different amounts of RAM. Nori’s trials show that Windows 10 can be run with much lower RAM than Microsoft suggests.

Nori uses a computer with a single core Intel Core i58400 processor for Windows 10 trials. Try running Windows 10 with different amounts of RAM through the virtual machine it has installed on your computer. Nori has tried to run Windows 10 with lower RAM capacities, starting from 512 MB in its last attempt.

In Nori’s trial, Windows 10 even ran at 192 MB of RAM. However, the tech-lover encountered a blue screen when he tried 128 MB of RAM. After trying to run Windows 10 again with 140 MB of RAM, Nori also failed this attempt.

Nori shares his experiences with people on his GitHub page, where he installed his operating systems on different devices. In an interview with Tom’s Hardware editors Nori, when asked why the tech enthusiast has been dealing with operating systems so much, Nori said he did it entirely for entertainment.