Home Tech Twitter is working on a novelty for TweetDeck 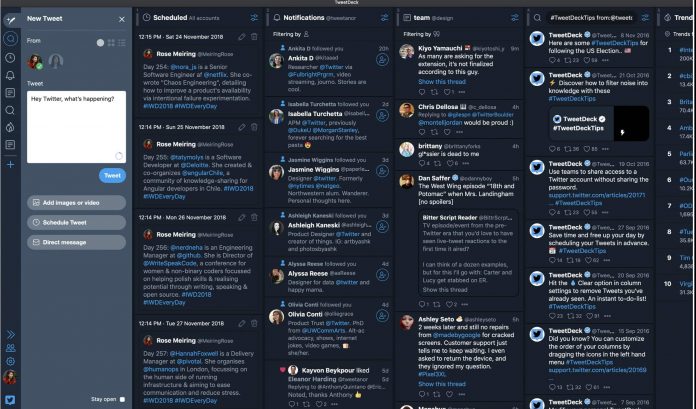 Twitter is currently working on a comprehensive refresh of the TweetDeck platform. TweetDeck puts lists or streams in easy-to-read columns. It makes it easier for those who work on social media or follow the agenda closely. Giving a comprehensive interview to The Verge website, Twitter Product Chief Kayvon Beykpour shared this important information.

One of the oldest and original third-party account management apps developed for the Twitter platform, TweetDeck hasn’t seen much in terms of design or major feature changes over the years. The app came out 12 years ago and was acquired by Twitter in 2011. As it still started, it offers vertical columns lined up from top to bottom for your various Twitter feeds. While Twitter has mostly kept the main TweetDeck design stable over the past years, its work has focused more on new functionality added to the main website and mobile apps.

This situation seems to be changing. Beykpour and its product team admit that they haven’t shown much affection for TweetDeck lately. Plans are being made to compensate for this. They are actively working on a new TweetDeck that they plan to show off later this year. This is part of a wider initiative to improve Twitter’s developer tools and repair relationships with app builders. On the other hand, this initiative is a move to get things right against a longstanding conflict between Twitter and the broader software development community. Meanwhile, Beykpour has not provided clear information on whether the new TweetDeck will be released this year or if a public preview will only be available.

Will this new TweetDeck undergo a comprehensive visual change, will there be new features, or both? It is not possible to answer this question for now. At the same time, whether Twitter will charge for TweetDeck is an unanswered question. Bloomberg noted in a report last month that the company was evaluating the idea of ​​a paid TweetDeck subscription used in exchange for a subscription fee.

Whichever form the new app appears, it will be a breathtaking change for those who have been using TweetDeck for a long time.

The Walking Dead: Trailer And Date Of The Season 11 (part...