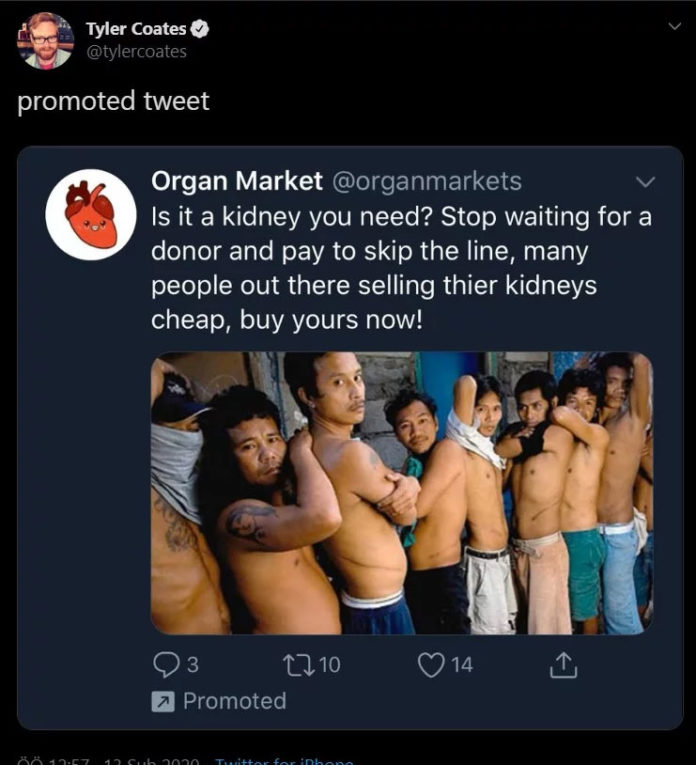 Almost everyone using Twitter coincided with the tweets brought to the fore by advertising in the timeline. Fraudulent advertisements are made by opening fake accounts, especially with the names of banks and some government agencies.

Twitter ads
(Do you need kidney? Stop donor waiting and get ahead of the queue! Many people sell their kidneys cheaply. Get your own kidney right now!)

The screenshot shared by Coates includes the sharing of a Twitter account called Organ Market. The featured tweet includes the following statements: “Do you need a kidney? Stop waiting for the donor and stay ahead of the queue! Many people sell their kidneys cheaply. Get your own kidney right now! ”

(I feel sorry for the money Nicorette has spent to show me this ad hundreds of times a day, someone who never smokes)

The popular social media platform switched to the tweet-show model about 5 years ago. The platform is constantly trying new ways to bring these ads in front of its users and we can say that it tries to remove the oil of the fly. The platform gradually prohibits advertisers from making targeted ads. Of course, this causes the wrong ads to be shown to the wrong people. You can see an example of this in the image above.

The Twitter account that sells human organs has been closed. Speaking to Gizmodo, the Twitter spokesperson said that these tweets violated the company’s Unacceptable Business Practices Policies and Inappropriate Content Policies. The spokesperson stated that both people and machines were used to examine the contents and that new investments were made in this area.

The platform, which does not allow targeted ads, unlike Google and Facebook ads, managed to make a profit of $ 1.47 billion in 2019. It seems certain that Twitter ads will be used for a certain period of time by small fraudsters in their own country, as in our country.