Home Entertainment TwitchCon 2022: Streamer Breaks His Back, Master Chief Dances with Megan The... 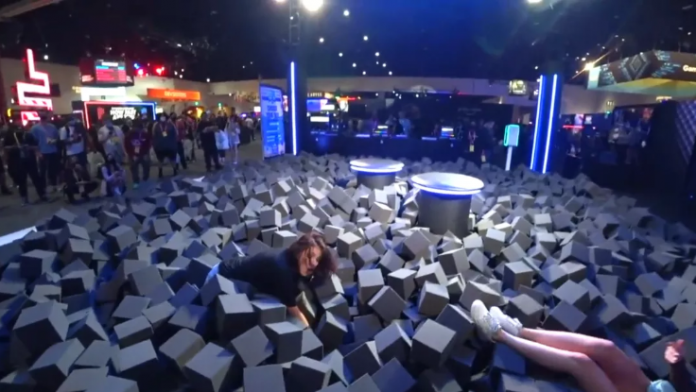 What just happened? TwitchCon, a Twitch convention dedicated to streaming and gaming, took place over the weekend and was quite eventful. In addition to the fact that Master Chief trained on stage with Megan The Stallion, one streamer broke her back and another broke her ankle while participating in events at the show.

The most serious injury occurred during the Face Off event, a promotional event between Lenovo and Intel. In this gladiator-style competition, two people tried to knock each other off the podium using large soft poles into a pit filled with foam cubes.

But whoever filled the pit with these cubes had to add them a little more liberally, especially since some streamers jumped from the stands after the fight. One of them was Adriana Chechik, an adult streamer and performer who has more than 800,000 subscribers on Twitch.

Probably the most painful thing I’ve seen in awhile. Twitch streamer Adriana Chechik has confirmed broken her back in two separate places following this jump at TwitchCon pic.twitter.com/QdojGn5UtG

As you can see in Jake Lucky’s video, Chechik jumped off the podium after her victory and performed a split in the air before landing on her tailbone. The grimace suggests a painful landing, but she begins to move and smile. It is then that it becomes obvious that Chechik is seriously injured. “I can’t get up,” she says, although the announcer insists, “no, no, she’s fine.”

Chechik later tweeted that she had broken her back in two places and needed to surgically insert a metal rod for support.

Well, I broke my back in two places and am getting surgery to put a meter rod in for support today. Send your support. When it rains it pours and I am definitely feeling the rain right now.

EdyBot, the other person in the video who crashed into the pit, said she also injured her back. Another streamer, LochVaness, dislocated her knee and sprained her ankle after coming off the podium, and others reported being injured while performing similar actions.

I’m the other girl in the video and a friend of Adriana. She would love to hear from other people who were injured in the same pit. Please dm me if you know anyone else who got hurt! I fell very lightly, and still felt a jolt up my back, and had pain for the rest of the night.

Many pointed out that the pit was too shallow, “like three cubes deep” for people to jump into it. According to Chechik, Lenovo said that people can dive (“mining first”), and a commentator on the stand mentioned that “he can jump into this foam and have fun.” However, PC Gamer notes that the participants were warned against diving into the pit, and they had to sign a disclaimer.

The event remained open until the incident with the Cap, despite several injuries. It reopened shortly after she broke her back, but was later closed due to the growing number of victims and those who used it “breaking the rules.”

Elsewhere on Twitch Com, streamer Genshin Impact Froze broke her ankle at the World Balloon Championships by jumping over a chair in a replica living room.

Master Chief, the covenant are invading, where are you?

In addition to all the injuries, visitors witnessed an unexpected sight when Master Chief Halo joined Megan Te Stallion on stage during her performance, proving that John-117 is just as deadly on the dance floor as on the battlefield.

The creator of Super Smash Bros. Masahiro Sakurai shows off his...

Universal Orlando was sued over an attraction involving Jimmy Fallon