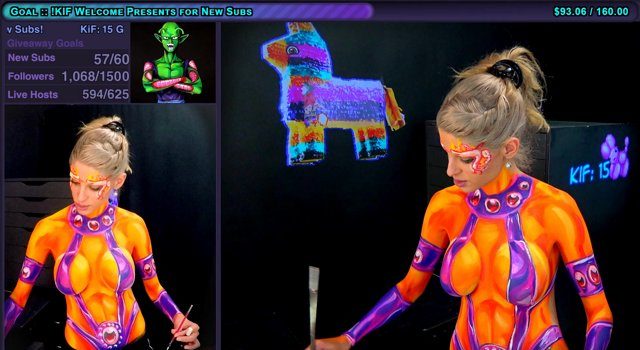 Twitch TV suspended Canadian streamer MizzyRose last Saturday (11) for broadcasting a body painting live. On the live, which happened on the same day, Mizzy cosplayed the character Mística, from the X-Men saga, and appeared with her breasts covered and covered with paint. At the time it was notified, the channel had 1,300 simultaneous viewers. Despite the short duration of one day, the suspension caused revolt in the 22-year-old influencer, who hours later made a post on Twitter saying that she had done nothing wrong.

Twitch is a streaming platform available for PC and web, and in an application for download on Android phones and iPhone (iOS). TechTudo contacted the platform in Brazil, which replied that “out of respect for the privacy of its users, Twitch does not comment on cases of individual people / streamers”.

Twitch is a live platform aimed at the gamer audience. However, in addition to videos about games, the service also accepts content on everyday matters and influencers from other branches. Mizzy shared the ban notification she received on her social networks. In the document, Twitch cites content with nudity or insufficiently covered body.

On April 7, Twitch announced changes in nudity and clothing policies after a series of complaints from users regarding the lack of transparency in the platform’s Community Guidelines. The public claimed that the rules were not clear and ended up generating unfair punishments.

In the announcement of the new rules, Twitch stated that “contours of covered genitals will not be allowed, and that all streamers should cover the area from the waist to the pelvis and buttocks with completely opaque clothing”, and stressed that necklines are allowed transmissions.

It is not the first time that an influencer has been banned from Twitch for doing a live body painting. The Forkgirl streamer was banned in February for the same reason and the case generated considerable outrage in the community, which saw the punishment as unfair.