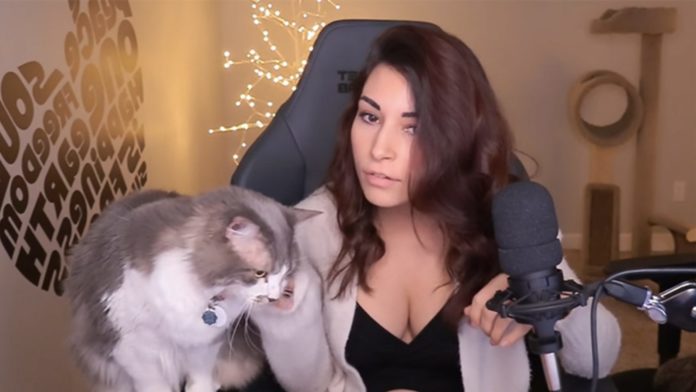 Twitch Publisher Alinity Defends Self Against Incoming Critics. The famous Twitch publisher Alinity, who has become the target of criticism many times, has been the subject of discussion again after a compilation video shared with Reddit. The publisher made comments on the official Twitter account about the video it was criticized for.

The famous Twitch publisher Alinity was able to draw attention and criticism again this week. The reason Alinity came up so much was a compilation video of moments with her pets during the broadcast.

This wasn’t the first time Alinity came up. She had been the focus of discussion and criticism many times before. However, the latest news we have reported here ended with PETA calling Twitch to shut down Alinity’s channel, causing the publisher to get into a bigger trouble this time.

I stream 6 days a week and get 12 periods a year. That's at least 48 broadcasted period days! So there are literally people combing through thousands of hours of streams. Lmao my Christmas tree from last year is in one 😁😎

Alinity’s dog was constantly sniffing at the publisher’s sexual area during the broadcast. Many people put forward the theories that the publisher trained her dog in this way. The publisher said in an official Twitter account that her dog exhibited this behavior during her menstrual period.

Alinity, previously published in a publication on the table and threw herself down the table was the target of criticism. Many people, including PETA, wanted the publisher to be blocked from the Twitch platform. Twitch left these requests unanswered and did not block the publisher.

After the compilation video spreading from Reddit, the publisher, who again draws criticism, said on her Twitter account: I broadcast at least 48 days in menstruation! People combine hundreds of hours of broadcast footage. In one of them, I have a Christmas tree last year .

In addition to this statement, the publisher left a link to an article explaining why her dog exhibited such behavior. Did you find Alinity’s statements sufficient? Do you think the famous publisher is right?