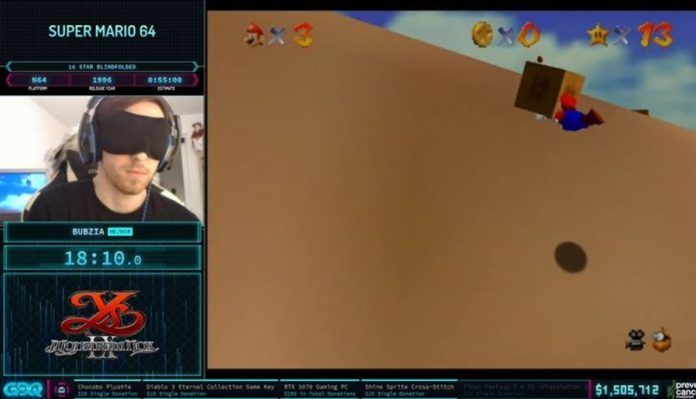 A Twitch streamer named Bubzia managed to finish Super Mario 64 in 39 minutes at the Awesome Games Done Quick 2021 event. However, the most striking point was that he did this blindly.

If you are interested in games or the game world, you may have heard the term “speedrun”. This type of gameplay, which is shaped around finishing the game as fast as possible, is applied to almost every game and speedrun players can do quite impressive work.

A very impressive performance was shown at the Awesome Games Done Quick 2021 event organized for this purpose. A Twitch streamer named Bubzia managed to finish Super Mario 64 in 39 minutes, blindfolded.

How he finished the game with his eyes closed may have left a question mark in minds. The player also punches the walls to find out where he is while following what’s happening in the game from the beat of the music in the game. Bubzia also used the Wii Controller at the end of the game while using the GameCub controller throughout the game.

Bubzia, who is also a YouTuber, plays games blindfolded in general. The broadcaster’s channel has many games such as NieR: Automata, The Legend of Zelda: Ocarina of Time, and Metroid Fusion, which is blindly speedrun. Bubzia finishes Super Mario 64 in 39.09 minutes, which is quite an impressive time.

Super Mario is one of the biggest brands in the game world and is shown by some as the game that saved the game world from the game crisis of 1983. Since such a big brand is designed, it can be played in many different ways. For example; A Twitch streamer named CZR managed to finish the game on drums.

Google I / O 2020 Canceled due to Coronavirus