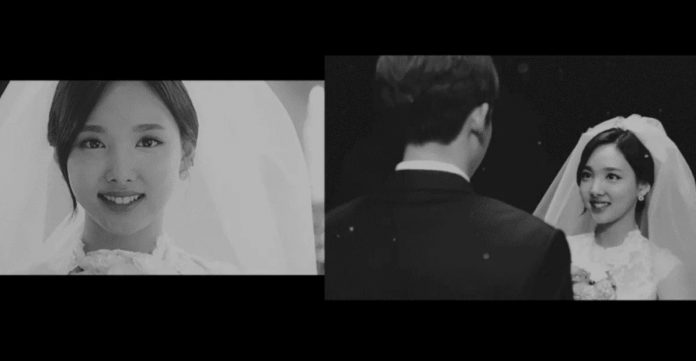 TWICE’s Nayeon became one of the cutest brides, but behind the excitement of her wedding was a sad story. K-Pop group TWICE’s Nayeon showed her versatility of styles in each comeback, this dazzled ONCE with her beauty and special style.

Did you know that she once became a cute bride from a melancholic wedding?

Nayeon is one of the members of the group TWICE who could surprise us all with her foray into Korean dramas, especially for her acting talent, which ONCE enjoyed more than once.

Throughout her career, rumors of Nayeon on romantic dates with different entertainment boys emerged, but netizens speculated, despite this, she has already experienced a wedding and even dressed as a bride .

Did Nayeon secretly marry someone or keep their relationship low-key and take the next step? No, none of that. The TWICE singer transformed into a sweet girlfriend with a heartwarming story set against a bitter and sad undertone.

In 2017, Nayeon was the model master of the MV Your Wedding of JUN.K 2PM. The clip also featured Nichkhun, who appears to be the TWICE member’s boyfriend, although the plot took an unexpected turn.

Fancy when the singer entered the place of her wedding dress bride, idol 2PM waited at the altar, to the surprise of all the spectators, he was not the groom but another guy who came later. OMG!

An excerpt from Your Wedding JUN.K of 2PM says:

The door opens and I see you come in, you really look very beautiful. Slowly, very slowly you walk … not to me, to someone else.

Nayeon looked very happy and with a look full of love for her ‘future husband ‘, despite this the MV of MV Your Wedding is somewhat nostalgic as Nichkhun imagined himself in the place of the lucky boyfriend of the idol. Bring the tissues!

Kim Minjun claimed that he wrote the lyrics after his ex-girlfriend called to tell him that she would be getting married soon. Unlike in the music video, the 2 PM vocalist did not attend his ex-partner’s wedding. Did you know that Nayeon appeared in JUN.K’s MV?

The Batman: Riddler Appears For The First Time Without A Mask...

Filmin Premieres of August 2021: The debut of Alan Moore and...