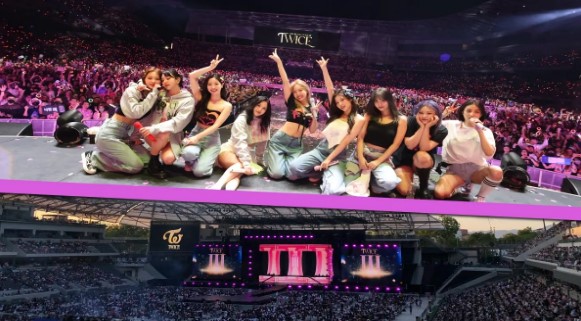 ONCE and TWICE met for a night full of music, fun and surprises. We will tell you how the first concert of idols took place at the Banc of California Stadium.

Although last year we saw that TWICE was very busy launching one comeback after another, this time their activity also brought great emotions to the fans, because after a couple of years the opportunity to see idols live has already become a reality.

Just a few months ago, K-Pop artists from JYP Entertainment gave several concerts in different cities of the USA, but their success was such that later they will announce their return with an additional show, but this time at the stadium.

Ticket sales soon ended and tickets were sold out, prompting TWICE to announce a second show. Now it’s time to see the idols, and the band held their first concert at the Banc of California Stadium in Los Angeles.

TWICE IN L.A. THIS IS HOW THE CONCERT AT THE BANC OF CALIFORNIA STADIUM LIVED

Dance The Night Away – a real party

This track always fills the audience with joy and motivates them to dance, but now, in an open space, it also gave idols and visitors the opportunity to see fireworks in the sky, which the girls from TWICE really liked.

Every time TWICE perform Moonlight, ONCE’s heart beats harder, but this time their performance was witnessed even by a bright moon, and the band members were happy to see the glow in the sky during the performance.

Sana and Jihe are having fun on stage

The girls who make up this group approached the cameras so that fans could take a closer look at them, but when Sana and Jihe sang together in this way, the idol attacked the leader of the group, causing everyone great surprise.

Dahen and the air of Los Angeles

In other cases, fans have noted that the broadcast in the United States and especially in Los Angeles has an impact on idols, as TWICE show a new facet on stage in the specified territory. This time it was demonstrated by Dahen, and ONCE did not hesitate to mention it on social networks.

In other K-Pop news, we inform you that Jenny is the most forgetful member of BLACKPINK, find out why.

Vikings season 6: why there won’t be a season 7?

Tom Ellis pissed off at fake accounts on the networks!