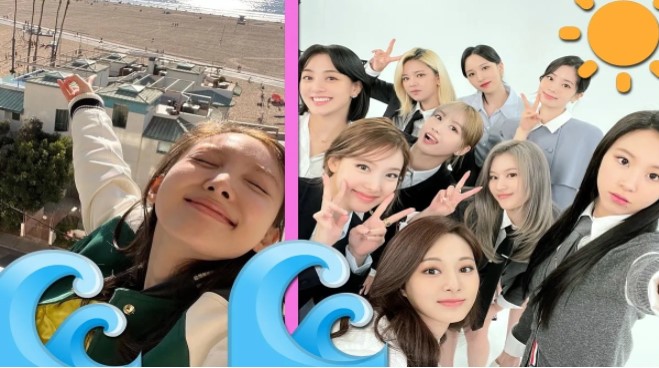 This weekend, the TWICE idols traveled to the United States where they will give a series of concerts in different cities, what did they do before the start of the live shows?

We can’t wait to see these idols on stage, bringing their energy and music to fans who have waited a long time to see them again. TWICE has already given a brief glimpse of the performances of this tour with the concerts in Korea and now they have everything ready to reconnect with the international public.

That is why recently the JYP Entertainment girl group traveled to the United States, the girls were caught at the Incheon airport and also posted messages for their fans, how was your stay in the American continent?

The K-Pop idols have taken it upon themselves to update ONCE by sharing a bit of the adventures and experiences they’ve had while getting ready for the shows.

TWICE ENJOYS BEAUTIFUL SUNSETS PRIOR TO THE START OF THEIR TOUR

Previously, the girl group canceled their planned promotions in the United States in order to take care of the idols’ health while traveling. That’s why the ancy singers have had a little more free time and are making the most of it.

The idols have shown some glimpses of their moments of relaxation near the beach, so the photos of TWICE in front of the sea have been some of the constants in the social networks of these girls.

In addition, they showed us beautiful sunsets that they have admired from the comfort of their hotel, making fans happy for the good times they are having. This break before the tour surely helped them to gain energy so we will soon see them show off their talents in performances.

TWICE’S US TOUR, WHICH CITIES WILL YOU VISIT?

The girls will kick off with two concerts in Los Angeles taking place at the Forum, followed by a show at Oaklan Arena and one more at Dickies Arena. The tour will continue in Atlanta, where a State Farm will be presented and finally there will be two concerts in Belmont Park that will have the UBS Arena as their venue.

TWICE’s tour of the United States will take place from February 15 and will end on the 27th of this month.

On the other hand, we tell you that a series of compliments for BLACKPINK’s Jisoo showed that she is more beautiful than in the photos.

US Businessperson Points to March 2020: Which Way Does the Technical...