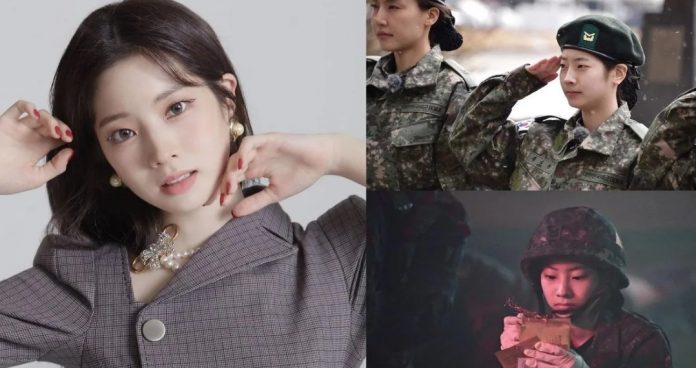 TWICE’s Dahyun experienced military life by joining the military. TWICE’s rapper surprised everyone when she was successfully part of military activities.

Dahyun had a memorable experience in the army, we tell you how she enlisted to live it and everything she faced during her participation in Real Men.

Throughout her career with TWICE, this singer has participated in different projects that show us how talented she is. In addition to singing and dancing alongside the group, she has also served as an MC, on variety shows, and more, so we even saw her join the military for a show.

In 2016 Dahyun was invited to participate in Real Men, a television show that consists of selecting some celebrities who should not fulfill the Korean military service and inviting them to know this experience for a short time, following the rules as anyone would.

Guests can include male or female teams, and the TWICE member was a part of season four alongside other artists such as Cao Lu, After School’s Nana, Gong Hyun Joo, and more.

TWICE’S DAHYUN GOES TO THE MILITARY THROUGH REAL MEN

Before going to the call, Dahyun enlisted to enjoy a meal with her brother and called her mother to say goodbye before embarking on the adventure. The girl also dyed her colorful hair black and paid close attention to other Real Men shows to visualize what her experience would be like.

The idol had the support of her fellow TWICE members at all times, from watching the episodes of the show together to helping her with her makeover and accompanying her on her arrival at the military base.

While there, Dahyun and the rest of the celebrities who were part of the show had different activities and training, from exercise routines, learning military formations and commands, first aid in emergency situations, and more.

Although the time that the celebs spend in this show is not the same as that of real military service, it does bring them closer to the experience and without a doubt, it is an unforgettable moment both for the challenges and for the learnings.

We also recently mentioned that Jeongyeon will be still in some TWICE promotions to take care of her health, find out what happened to the idol.