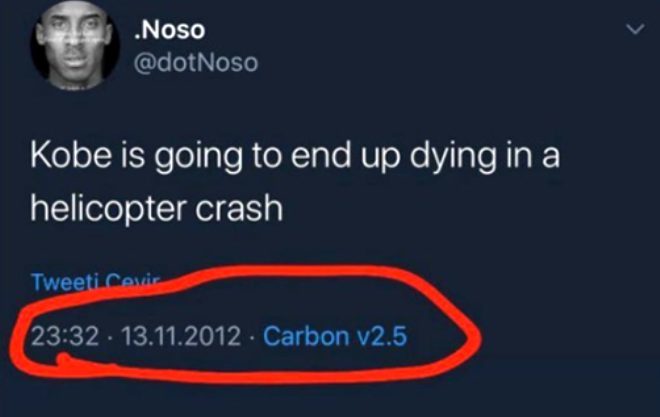 It was predicted that in a tweet alleged to have been fired in 2012, Bryant would die in a helicopter crash after Kobe Bryant died. Researches revealed that the tweet was fake.

New news continues to come about Kobe Bryant’s loss in a helicopter crash. A tweet, which was re-hose after the accident and that was made in 2012, made a big noise.

However, a study revealed that the tweet that appeared on November 3, 2012 by the user Dotnoso was fake. The client named Carbon v.2.5, under the tweet reporting about prophecy of Bryant’s death, led to the emergence of Dotnoso’s foya.

The research conducted by a Twitter user revealed that the 2nd version of Carbon software was published in 2014, while the version named 2.5 was released in 2017. More importantly, Carbon v.2.5 was used for past tweets. In other words, users can edit the tweets they send through this client as if they were in the past.

Dotnoso Twitter user also used the application called Carbon v.2.5 to get large numbers of interactions. The use of this application, which has very little information on the Internet, to fool people in this way, provoked a reaction in social media.

The truth about Hollywood’s secret ritual to succeed